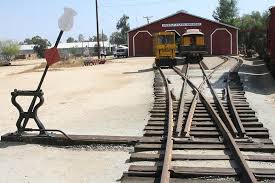 The whistle on the approaching locomotive shrieked in desperation. Angry hands grabbed the big iron “harp switch”, and forcefully slammed the flagged handle aside. With a ringing thud the lever shoved the twin iron rails 3 inches, opening the point. 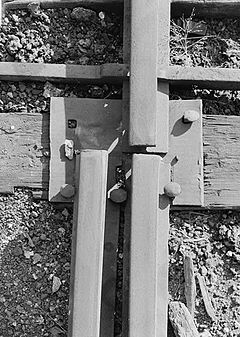 A cheer rose from the men watching round the station. The 4 large drive wheels on the locomotive abruptly stopped turning, and white yellow sparks danced where the iron wheels now slid along the iron rails. One of the thin men shouted, “We are done walking, General!” The rabble cheered again. One of the rebel officers drew his Navy Colt revolver from his belt.

The trouble began after the Army of Mississippi reached the Southern Railroad 12 miles east of Jackson. They had been marching for a week, from Vicksburg to Edwards Depot, to Raymond, 3 more days to the Pearl River, 2 more days to be ferried across and to march north to Brandon. They had been promised they would board cars of the Southern Railroad for the 40 mile ride to Enterprise, and then a one day march south to new camps where they would be fed and rested while they waited to be exchanged for Yankee prisoners.

These 30,000 sick, exhausted Confederate soldiers watched train after train disappear toward Enterprise, carrying everything from supplies to the Mississippi Governor and his state's records. Then, on Wednesday, 15 May the men were told there would be no trains for them. Discipline collapsed. 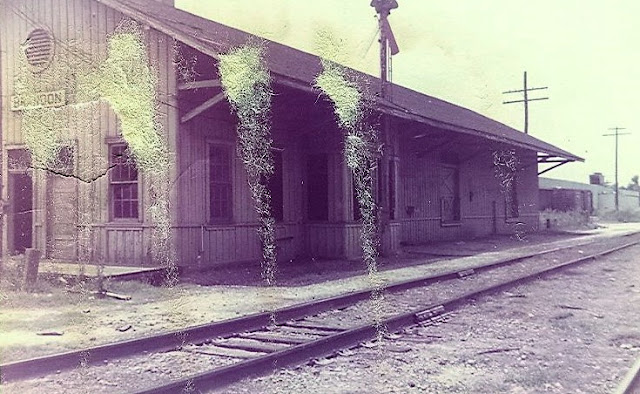 Private Epram McDowell Anderson, a 21 year old from the First Missouri Brigade, witnessed the riot of weary men. “Efforts were made,” he wrote a year after the war, “by moving the switch, to throw the trains...from the track...officers had to draw and threaten to use their side-arms before the mob could be subdued. (Later) One man got up in the plaza of Brandon and offered to...go and hang (General) Pemberton, the traitor.” And the dispirited remnants of the Army of Mississippi had to complete their journey via “shank's mare” to the Chickasawhay River and Enterprise, 12 miles inside Alabama. 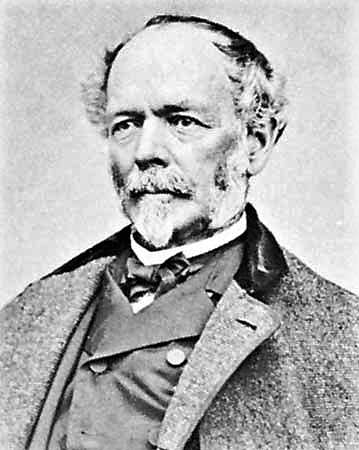 General “Old Joe” Johnston (above) had to stop the trains, to protect the locomotives. West of the still damaged Pearl River bridge some 90 steam engines had been or soon would be lost. None of these could be replaced. 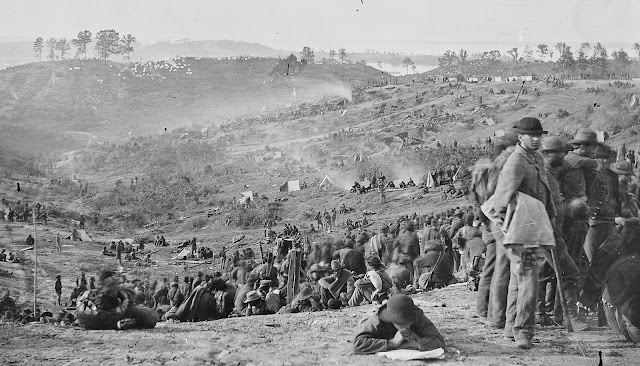 And while the Confederacy did everything it could to keep the Yankees from learning of the Brandon riot, 32 year old William Nugent, one time lawyer and now Mississippi Inspector General admitted in a 28 July letter to his wife Eleanor that, “...after the fall of Vicksburg I entertained the most gloomy forebodings...The great demoralization produced in our army...was enough to make one dispirited.” He hoped, he said, that with time the officers could, “...reorganize and re-discipline our army...”. It was a desperate hope. But with the fall of Vicksburg, the Confederacy had little left but desperation. 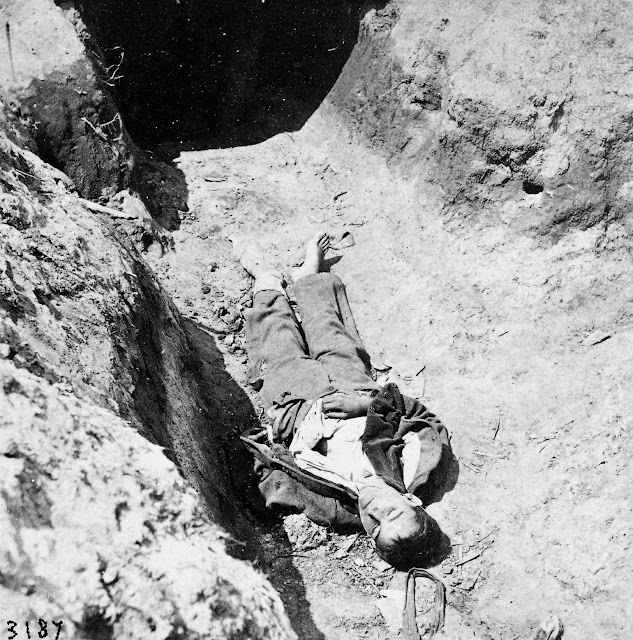 Disaster followed upon disaster. On Thursday, 9 July the outpost of Port Hudson surrendered 6,500 men to General Nathaniel Banks. On Friday, 10 July Joseph 'Old Joe' Johnston and his Army of Relief retreated back inside the defenses of Jackson. 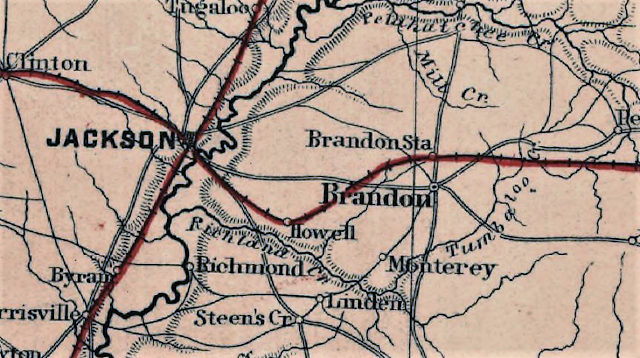 But with the Pearl River Bridge still not repaired, his 28,000 men had no hope of defending the town against the 40,000 Yankees gathering outside its trenches. The weather was hot, General Sherman noted, adding that “...on the morning of July 17th the place was found evacuated. General Steele's division was sent in pursuit as far as Brandon...but General Johnston had carried his army safely off, and pursuit in that hot weather would have been fatal to my command.” 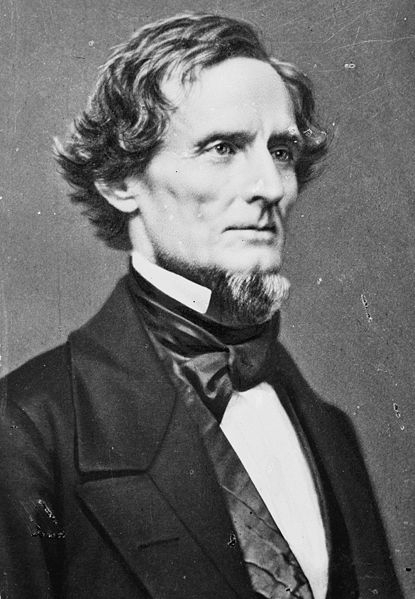 And with that anticlimax, the Vicksburg campaign came to an end. Confederate President Jefferson Davis (above) had no doubt who and what was to blame for the outcome. Vicksburg was lost, he insisted, because of a “want of provisions inside and a general outside who would not fight.” The latter being the cranky and passive-aggressive Joe Johnston - whom Davis had appointed. 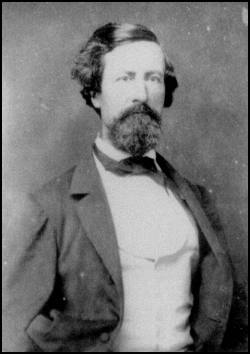 But what about the general inside, the uninspired and uninspiring Lieutenant General John Clifford Pemberton (above)? He was also Davis' choice. And Davis had advised him not to follow Johnston's' advice. It seemed to be all of a piece, that and Davis' refusal to admit any personal culpability in the disaster, 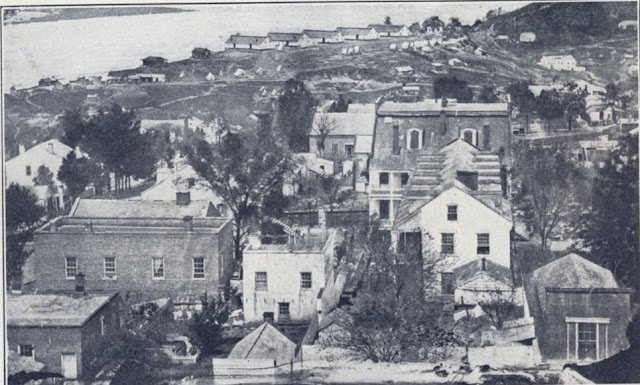 The Vicksburg Campaign began in December of 1862 and had lasted 7 months through July of 1863. It cost the Yankees 10,000 dead, wounded and missing, while the Confederacy suffered over 45,000 causalities.

In just 7 months, Jefferson Davis' insistence on holding Vicksburg and Port Hudson, even after Grant had destroyed the Pearl River Bridge, had cost the Confederate government an entire field army, as well as all but a 12 mile eastern sliver of the state of Mississippi, some 48,500 square miles of sovereignty lost. 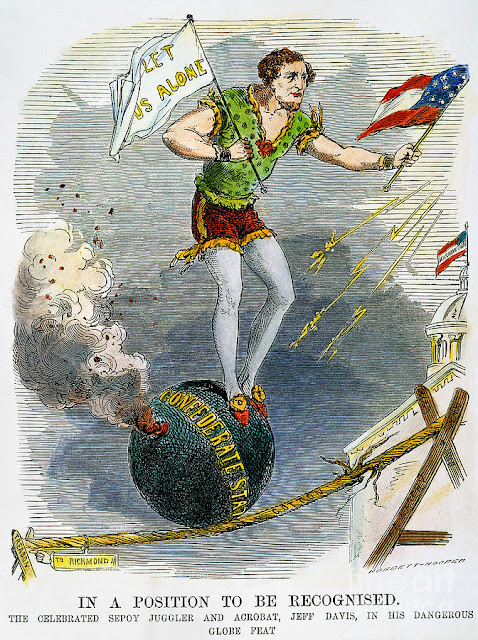 Jefferson Davis' culpability in this disastrous campaign proved a damning indictment of his military skills. The President of the Confederacy had no business telling any general where to place his men. 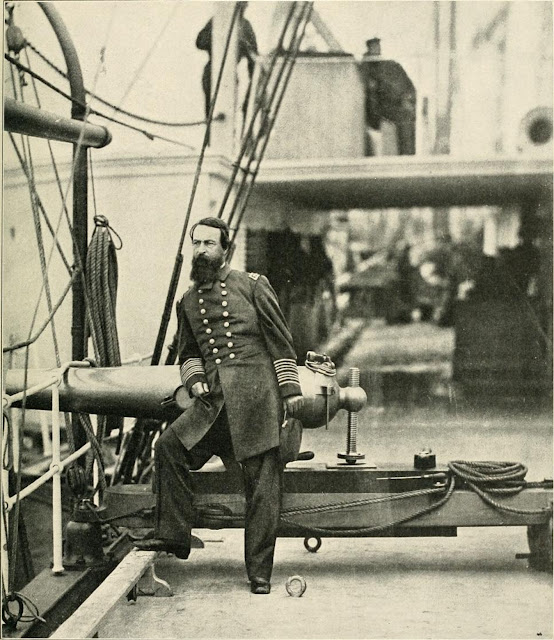 David Dixon Porter (above),  the 53 year old Admiral of the Yankee brown water navy, had been accused of never praising a superior. And he was never a close friend of Grant's. But he had nothing but praise for the Major General. “No ordinary general could have taken Vicksburg” said Porter. “Some men would have given it up....some would have demanded half the resources of the Union; but Grant never wavered in his determination, or in his hopes of success." 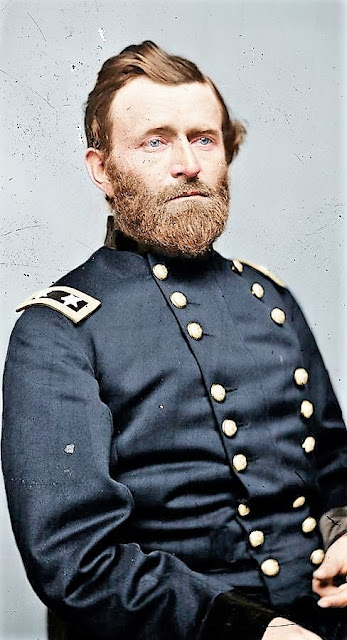 Most important of all to Midwest farmers, a war which had seemed a stalemate 7 months earlier, was now clearly on the path to victory. As Lincoln put it, “The father of waters now ran unvexed to the sea.”  And that was the achievement of Major General Grant. 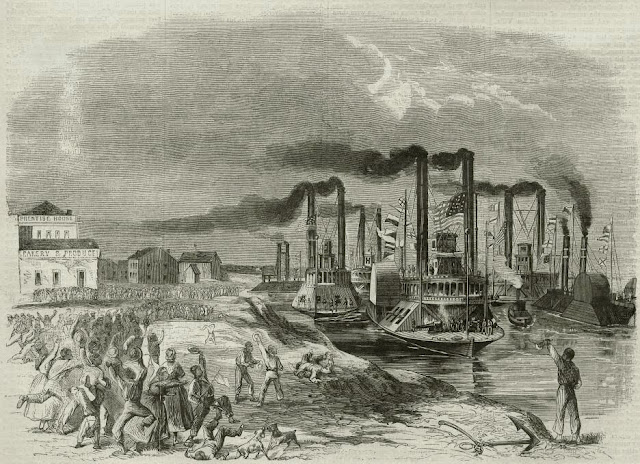