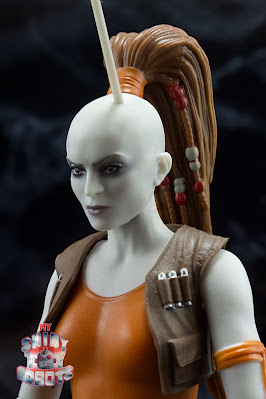 Release Date: October 2021
RRP: $22.99/£21.99
One of the best things about the Star Wars universe is how a background character can not only become a fan favourite, but also develop into something far more than their original appearance. Palliduvan bounty hunter Aurra Sing originally had a blink-and-you'll-miss-it appearance in The Phantom Menace, but reappeared in various bits of expanded universe material before being fully characterised in Star Wars: The Clone Wars – mentoring the young Boba Fett as well as taking jobs from Cad Bane and teaming up with fellow bounty hunters Bossk and Dengar. Even in her limited appearances she's made quite the impact, and Hasbro have recognised her popularity with their Black Series Aurra Sing figure – a long overdue addition to their six inch collector range. 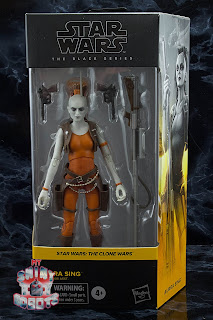 "A feared bounty hunter known for her chalk-white skin and built-in comm-link antenna, Aurra Sing was an expert sniper and trained assassin who would work for anyone who paid her."

Though Aurra Sing may have technically made her debut in The Phantom Menace, Hasbro have rightly decided to place her in the Clone Wars range of figures given that this is where she is best known from. As such her packaging features yellow borders and accents like the other Clone Wars figures, and has been designated as the eighth figure in the range. As usual one side of the packaging features newly designed character artwork that joins with the other Clone Wars figures in the line as part of a connecting mural, and then that artwork is repeated on the back of the box alongside the short character bio written above. Open her up and both the figure and accessories are neatly stored on their moulded plastic tray. 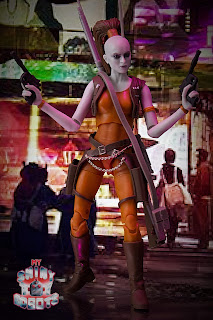 Aurra Sing originally making her debut in live-action technically worked to Hasbro's advantage here, as it gave them something to base the figure off in order for it to fit the live-action aesthetic they've tried to keep across the Black Series. As such the head sculpt does bear some resemblance to her original portrayal by Michonne Bourriague, complete with chalky white skin and black shadowing around the eyes. While a slightly more menacing expression would have fit the character perfectly, there's still a decent level of threat in the more neutral expression Hasbro have gone for. Of course the big question concerning this figure is just how fragile that long antenna sticking out of her skull is, and thankfully the answer is "not very fragile at all". It's a little thicker than it should be, but with something like this sturdiness definitely wins out over screen accuracy. Breaking it certainly isn't impossible, but should be much less likely. The hair is done in a long ponytail that's solid plastic, but sits far enough away from the head that it doesn't affect articulation. The body sports a bright orange jumpsuit with a removable brown vest piece, as well as a holster belt adorned with a number of chains. What the jumpsuit lacks in terms of intricate paint apps, the figure certainly tries to make up for with that belt. Most importantly of all though Hasbro have done a great job on her proportions, particularly her creepy triple-jointed fingers. 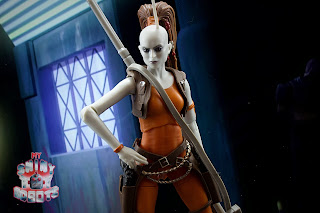 Articulation is fairly standard for the line, although there is one nice little surprise in here that sets Aurra apart from many other Black Series releases. Altogether she features;
- Ball jointed head, waist and hips
- Swivel hinge shoulders, elbows, wrists and ankles
- Double hinge knees
- Thigh swivels
The use of double hinged knees here is considerably more preferable to the swivel hinges Hasbro tend to use on current Black Series releases, but it's a shame that the whole belt/holster setup gets in the way of making full use of the hip articulation on offer. As previously mentioned despite the size of her hair the fact it sits so far away from the head means articulated there isn't affected whatsoever, and the ball jointed torso is perfect for added more expression to poses. Double hinge elbows would have worked especially well on this figure given her species design, but alas Hasbro rarely seem to want to make an exception on this figures – especially when it’s a female body one. 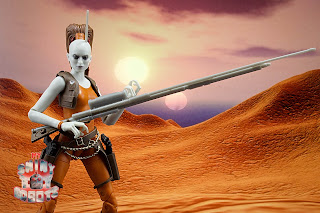 The figure's accessories include twin DX-13 blaster pistols as well as her signature weapon – the Czerka Adventurer rifle. The blaster pistols are moulded in black plastic without any additional paint apps, and when not in use can be stored in the holsters on both side of the belt. What makes these guns particularly interesting though is their two triggers, which work wonderfully with Aurra's slender digits moulded each moulded with two flexible trigger fingers. Despite these being her sidearms they work far better than the rifle, which despite its impressive size and potential has actually come out rather underwhelming. The first problem is that it's moulded entirely in light grey plastic, with only a splash of brown painted added to the stock. While it not having all of the paint apps to be fully screen accurate isn't a problem, the basic grey just looks extremely cheap and doesn't do the mould itself any favours. But even more annoying is the soft plastic strap Hasbro have also included, which clips onto the rifle so that it can be slung across her back. The problem however is that the clips are pretty weak so it doesn't take very much at all for them to knock out of place. The figure can hold the rifle reasonably well but the hand not holding the grip will need a little bit of manipulating to properly wrap around the shaft. Due to the shoulder and elbow limitations you can't really bring the rifle up to her line of sight, but when your weapon is that big any pose you put her in looks relatively imposing anyway. 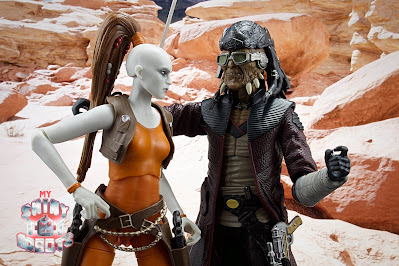 Black Series Aurra Sing is a great addition to the line, bolstering the number of prequel bounty hunters as well as a nice little break away from the core cast members, clones and Mandalorians we've mostly been seeing recently. It's a shame her signature weapon misses the mark so much (pun most definitely intended), but at least she looks good dual-wielding blaster pistols instead. With the franchise being a bit Boba Fett crazy at the moment it would be great if Hasbro took this opportunity to produce a kid Boba for her to mentor, but even if that's some way off at least she still has her ex Hondo to hang around with.