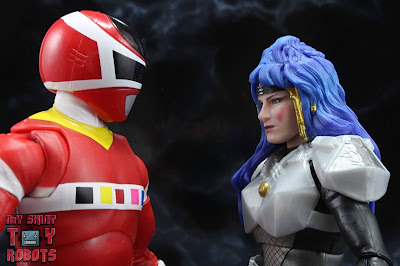 Release Date: November 2020
RRP: $39.99/£39.99
If there's one thing that can be said about Hasbro and their treatment of the Power Rangers brand, once they got the ball rolling with the Lightning Collection it just never stopped rolling. Between all the mainline releases, two-packs, exclusives and monster releases it can be incredibly hard to keep track of everything that's come out so far, let alone buy it all. At the end of last year Hasbro released a further two sets in their growing range of "versus" two-packs, one of which was a match many fans/collectors were extremely excited to see - Lightning Collection In Space Red Ranger vs Astronema. After passing over Andros in favour of Leo in the Lost Galaxy Red Ranger/Psycho Red set, it's great to see the leader of the Power Rangers in Space debut in an even more fitting two-pack against his sister Karone's evil alter ego – the Princess of Evil Astronema. 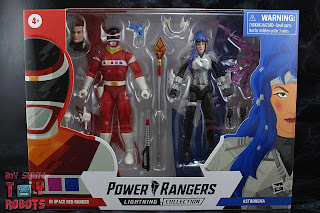 The Lightning Collection "Versus" two-pack boxes are a brilliant variation on the line's standard packaging design, with a big window to view the figures in the centre flanked by Tom Whalen's fantastic character artwork on either side. As usual, the two-pack artwork slightly differs from the single releases as the characters are pictured face-on rather than turned slightly. On the one hand you have a fully morphed Andros against a red backdrop, and on the other Astronema against a blue one which nicely matches her hair. These bits of character artwork extend onto both spines, giving you both a full bust when looked at from and angle and the usual bookend-style spines that go great on display. On the back you'll find a single rendered image of the two figures doing battle, and inside they are neatly stored along with their accessories on a moulded plastic tray. 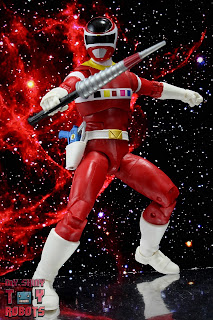 Andros is the second Space Ranger to be released in the Lightning Collection and the first male ranger, following on from the release of the Yellow Ranger in the main range a few months earlier. The Lightning Collection has a whole though already has PLENTY of Power Rangers in Space representation to boast about, given that the line's already put out the whole Psycho Ranger team. The Space Ranger suits might seem like some of the more basic ones in the franchise but there's a definite elegance to that simplicity, one that Hasbro have tackled really well between the rangers released so far. The giant sections of core colour are nicely broken up by the bits of white, with the chest stripe of course having the five colours of the team running across it as well. On top of that, you also have the gold belt buckle and yellow triangle around the neck giving the suit a touch more colour. Arguably the best thing about the Space Rangers though are the helmets, complete that big glossy circle located just above the visor. It's a great looking suit, and the best part about there being less detailing to do is that it means every detail is done perfectly. 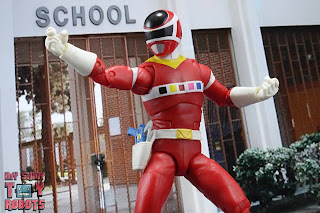 The Lightning Collection body is a pretty familiar sight to anyone already with a passing interest in the line, because of course for the most part all these ranger figures are exactly the same when it comes to articulation. Representing pretty much standard practice for the line, the In Space Red Ranger features;
- Ball jointed head, neck, torso and hips
- Single hinge neck and ab crunch
- Swivel hinge shoulders, wrists and ankles
- Butterfly shoulders/pecs
- Double hinge elbows and knees
- Bicep, thigh and boot swivels
There's lots of great movement here, and with nothing on the body to get in the way of it all this figure can pull off some pretty good movement. Some previous figures have had issues with how deep the ball joint fits inside but that doesn't seem to be a problem here, as Andros displays a good range of motion in both the head and the neck. The combination of butterfly and swivel hinge shoulders continue to do a great job in providing satisfying arm movement, while the tilt on the ankles will help balance any pose you throw those legs into. I've said plenty elsewhere in previous Lightning Collection reviews, but overall the articulation continues to be one of the leading strengths of this line (on the male figures at least). It's both consistent and built extremely solid. 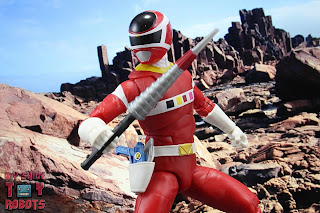 Andros' accessories include two additional hands (a right pointing hand and a closed left fist, complimenting the pair of weapon holding hands already attached), an Astro Blaster and the red ranger's personal Spiral Saber. The Astro Blaster is identical to the one included with the Yellow Ranger, and can be stored in the belt holster when not in use. The Spiral Saber is moulded in grey plastic with additional red and black paint detailing. Unfortunately as the handle has been painted black, putting it in the figure's hands can result in some paint rubbing off. It's annoying, but unsurprising given how many figures in the line this issue affects. Nevertheless both weapons look excellent, the Astro Blaster once again catching the eye with its bright blue and silver colouring. It's a shame that no unique effect part was included for the Spiral Saber, but as only one seems to ever be included in these two-packs again it isn't all that surprising. Not to mention there are plenty out there already that would look great with this weapon anyway. All in all is a fairly succinct selection of accessories, but everything you'd need for a solid In Space Red Ranger figure. 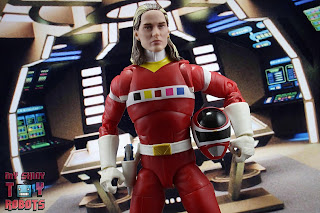 Rounding off the accessories is of course an unmorphed Andros head, which is definitely one of Hasbro's better offerings in the line. The face itself has a reasonably good likeness to actor Christopher Khayman Lee, and the colouring on the hair is pretty good given the size and price point of the figure as well. Best of all even with the long hair slightly draping over the shoulders the figure doesn't lose any articulation with the alternate head attached, so is just as poseable like this as it is fully morphed. 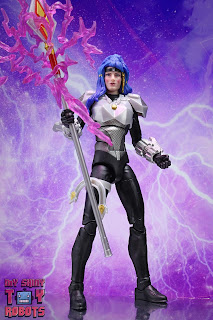 Moving on to the second half of the set – move over Divatox, Astronema has arrived to finish off the Power Rangers once and for all! The Princess of Evil had many different looks over the course of Power Rangers in Space (some of which will almost certainly get figures of their own at a later date), but to kick things off Hasbro have decided to go with the blue hair that first appeared in "The Secret of the Locket" and carried on through to "Dark Specter's Revenge (Part 1)". This look is also accompanied by the upper torso body armour, which appeared with a select number of her looks. Whether this is your preferred look for Astronema is or not the figure itself looks fantastic – they might not have been able to quite nail down the wildness of the hair with the sculpt itself but the colours are superb. The face sculpt is another winner for the line too, not only capturing a good likeness of Melody Perkins but also feeling a little more alive with its coloured cheeks and shiny lipstick. Though the body armour is a solid piece of (mostly) unpainted plastic there's plenty of really good sculpting and paint detailing going on in the figure as well – the silver netting running down the torso and the arm gauntlets being two such highlights. 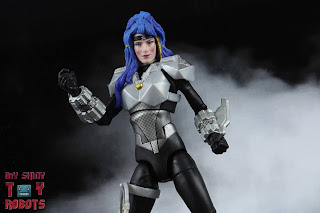 The standard female body used for the Lightning Collection isn't quite as solid as the male one, but other than a few minor gripes in comparison it's still another good effort by Hasbro. Altogether Astronema features;
- Ball jointed head, neck, torso and hips
- Single hinge neck and ab crunch
- Swivel hinge shoulders, elbows, wrists and ankles
- Butterfly shoulders/pecs
- Double hinge knees
- Bicep and thigh swivels
The problems with Astronema's articulation don't come from the joints themselves, but rather the parts that have been used around them. For starters, as great as that head sculpt look that hair completely destroys the head and neck articulation. The hair draped over her right side makes it practically impossible to turn her head in that direction, and even the opposite proves a bit of a struggle as well. Astronema may have a very flexible torso joint to try and alleviate this somewhat, but poses just don't look quite right when it's such a struggle to turn the head to either side. Similarly Astronema's body armour includes two soft plastic shoulder pads which hang over the arms, which are a little bit flexible but definitely get in the way when you're trying to raise the arms any higher than 90 degrees. It's a shame her design holds back the figure in some key areas, but they are at least ones that can be potentially fixed with future versions of the character that either have the shorter hair or lack the body armour. 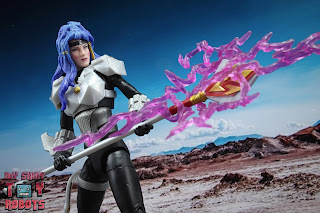 Astronema's main accessories are two alternate hands (giving her a pair of weapon holding hands and a pair of closed fists), her Wrath Staff and a translucent purple lightning effect part. Also included is her Wrath-a-range boomerang weapon, however this is mainly there to clip onto her leg and doesn't really work that well with the hands included. It's made of a soft plastic and clips around a small tab on her right leg, and then is able to tilt to be posed at different angles. The Wrath Staff is a relatively simple design but looks great, with the red and gold paint apps at the top really standing out on that unpainted grey plastic. The giant lightning effect is a little unwieldy and it isn't all that clear just how it fixes onto the staff, but once it has looks great and is the correct colours for her staff attacks on the show. The other cool thing about this effect part is that it's big enough to loop around another figure's weapon as well, so you're able to pose Astronema locked into combat (with the In Space Red Ranger for example) really well without too much fiddling about positioning the effect piece. 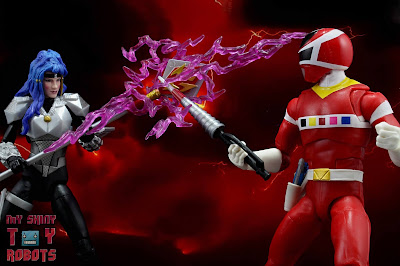 These "Versus" series two-packs are a fantastic way for fans to create some classic Power Rangers match ups and arguably the Lightning Collection In Space Red Ranger vs. Astronema set is one of the best they could have offered. Two extremely popular characters that have a significant connection – one another addition to the growing collection of red rangers and the other the main villain from a series that isn't Mighty Morphin (not to mention one with tons of repaint/remould potential), neither of which have been previously released in the line. Any individual flaws these figures may have are easy to overlook given just how great this set is, as well as the joy that we somehow managed to get an Astronema figure only two years into the Lightning Collection. Even amongst some of the more questionable decisions Hasbro make with this line, this set is definitely one of their best.