BROOKLYN—Outside the Park Slope Food Coop in one of America’s bluest bulwarks, masked shoppers still wait outside in socially distant lines. The 48-year-old co-op is perhaps the nation’s most political—and progressive—grocery store, but on a recent Friday afternoon, its members were not particularly eager to discuss the man nearly all of them voted for last year: President Joe Biden.

“He seems to be keeping his head above water, but he’s just treading water,” Kat Egan, a 56-year-old leadership coach, told me as she headed in for her monthly return to the co-op after leaving Brooklyn for upstate New York earlier in the pandemic. “Everything seems kind of mediocre.”

Biden, you might have heard, is none too popular across the country at the moment. Eleven months into his tenure, his 42 percent approval rating, according to Gallup, is lower than that of any other recent president except Donald Trump, who never commanded majority support during his four-year term. Biden has even dropped to Trump-like levels in the upper 30s in some recent polls; far from rebounding, his public standing has further eroded in the months since he presided over a chaotic and widely panned withdrawal from Afghanistan, and the emergence of the Delta variant dashed hopes that the pandemic was ending. The president’s rating has ticked up a bit in a few recent polls, but the Omicron variant, which is now spreading faster than any previous coronavirus wave, could quickly snuff out any lingering optimism about the pandemic, and with it, the chances for a full Biden recovery this winter.

The most glaring explanation for the president’s slide is that finicky independents—the nation’s perennial swing voters—have deserted him. In a recent survey conducted by Marist for NPR, Biden’s approval rating with this cohort stood at just 37 percent; in April, by comparison, 52 percent of independents backed the president’s performance in the same poll, a number that nearly matched his overall approval rating in the survey of 54 percent.

Yet recent surveys have also picked up a distinct softening of support for the president on the left. Biden was riding highest in the polls in the spring, around the 100-day mark of his presidency. Congressional Democrats had just passed his $1.9 trillion American Rescue Plan and sent $1,400 checks to millions; COVID case counts were plummeting as vaccines became widely available. Among Democrats, Biden’s approval rating in the spring stood in the mid-90s, but in several recent polls, it has fallen into the low 80s. The drop among self-identified liberals was even bigger—just 66 percent approved of the president’s performance in a recent Monmouth poll, compared with 88 percent in April.

Throughout Trump’s tumultuous tenure, political reporters in search of the president’s blue-collar base trekked out to Midwest and Rust Belt diners so frequently that the articles they produced inspired their own parodies. To investigate the roots of Biden’s Democratic discontent, I ventured to pockets of Brooklyn where his 2020 vote was nearly unanimous. The Park Slope Food Coop is a Brooklyn institution renowned (and to some, notorious) for its rules—members must work shifts to access the store’s discount prices—and its progressive politics. In the precincts around the co-op, about 95 percent of voters cast their ballot for Biden. He was not the first choice for many of them—the most popular Democrats early in the primary were Elizabeth Warren and Bernie Sanders.

What I found among this heavily white, mostly college-educated set was not so much anger as ennui. When I asked co-op members how they thought Biden was doing, the most common response was a sigh and a one-word “Fine” that sounded more exasperated than enthusiastic. “He’s up against a lot,” Jennifer Percival, a 42-year-old speech pathologist, told me. “We’re just trying to hang in there with him.”

My thoroughly unscientific survey uncovered no mass exodus from Biden’s corner in Park Slope. Some progressives said he had even exceeded their expectations, citing an agenda that was more ambitious than Biden had initially campaigned on, as well as the passage of the COVID relief bll and the more recent bipartisan infrastructure package. Others blamed the media for the president’s unpopularity and noted that much of what ails Biden—the COVID resurgence, inflation, Democratic infighting—are out of his control. “I don’t think Joe Biden can do much about Joe Manchin,” Abraham Pollack, a 38-year-old jazz musician, told me. “A lot of people on the left wanted him to deliver the world to them,” he said, “but he can only do so much.”

Of the 20 people who agreed to be interviewed over the course of an afternoon, not one said they disapproved of Biden’s performance. But there were more subtle shifts that offered hints of a broader trend that national polls could be detecting. A few progressives said they were unsure about Biden’s performance, after being much more supportive in the spring, and many others said they approved of the president but felt less hopeful about him—and about the country—than they did earlier in the year. “I’m not feeling very good about the country,” said Bill Gross, 76, a retired psychiatrist. “Things haven’t changed.”

The white, financially comfortable progressives of Park Slope, where the median listed home price is $1.5 million, are hardly representative of Biden’s urban base, so I next headed farther out in Brooklyn, to East Flatbush, a predominantly Black neighborhood where many precincts voted overwhelmingly for the president. There, too, Democrats remained supportive of Biden overall. “I like Joe. At least he’s trying,” Michelle Lynch, a 54-year-old nurse, told me. But they were quicker to voice ambivalence or dissatisfaction in his performance. Few people were paying close attention to the legislative wrangling on Capitol Hill—none mentioned the Build Back Better Act by name, and only one cited the Senate filibuster as something she wanted Biden to tackle. But multiple Democrats in East Flatbush brought up student loans, saying they were disappointed that the president had not acted to forgive them, as progressives like Warren have lobbied him to.

Lisa Ellison, 48 and a home-health aide, described her opinion of Biden as “borderline.” “Everything he said he was going to do for us he hasn’t done,” she told me as she headed into a Target. Ellison, a resident of Bedford-Stuyvesant, recalled feeling better about Biden earlier in the year after receiving a stimulus check. “We need more of those,” she said, “especially with food and prices going up.”

New York City’s progressive bent is easy to overstate: In last year’s mayoral election, Democrats favored a former police officer and party insider, Eric Adams, over candidates who ran more aggressively to the left. In some ways, Adams followed the path pursued by Biden, who also prevailed over more liberal rivals. “Biden seemed like the right person for the moment,” Jeannie Segall, 67, a retired health-care worker, told me outside the Park Slope Food Coop. “I’m fearful of the right, but I’m also fearful of the left shooting us in the foot and handing us over to the right.”

Biden doesn’t have to fear that disenchanted progressives in Brooklyn will, like some of their more centrist suburban neighbors, flock to the GOP column in next year’s midterms. Though slightly more than 200,000 Brooklynites voted for Trump in 2020, Brooklyn remains a lock for Democrats, and New York State probably does too. But the slippage that both national polls and my own small survey have detected could matter more in states such as Pennsylvania, Georgia, and Wisconsin, where Democrats are relying on robust turnout from white progressives and Black voters in urban centers. “These aren’t numbers that strong leaders bring to the table in their first midterm election,” Lee Miringoff, the director of the Marist College Institute for Public Opinion, told me.

The good news for Biden, Miringoff said, is that although his poor polling is due in part to a drop-off among Democrats, they are the easiest voters for him to win back. That was apparent from my interviews with Democrats in Brooklyn, who clearly were rooting for Biden to succeed even if they weren’t quite sure what more he could do. “I wish he could twist the arms of Manchin and [Senator Kyrsten] Sinema—or break them, maybe,” Gross, the retired psychiatrist, suggested, referencing the Senate Democratic holdouts on Biden’s Build Back Better bill. The days after we spoke brought news that Democrats were likely to delay the legislation until next year, prompting another round of hand-wringing from Beltway progressives who see its passage as an urgent priority. Yet for all their angst, the rank-and-file Democrats weren’t exactly relying on the same deadline. Biden may not have their enthusiasm at the moment, but less than a year into his presidency and nearly another year before the next major election, he does seem to have their patience. “People should give him time,” Lynch said. “Just give him time.” 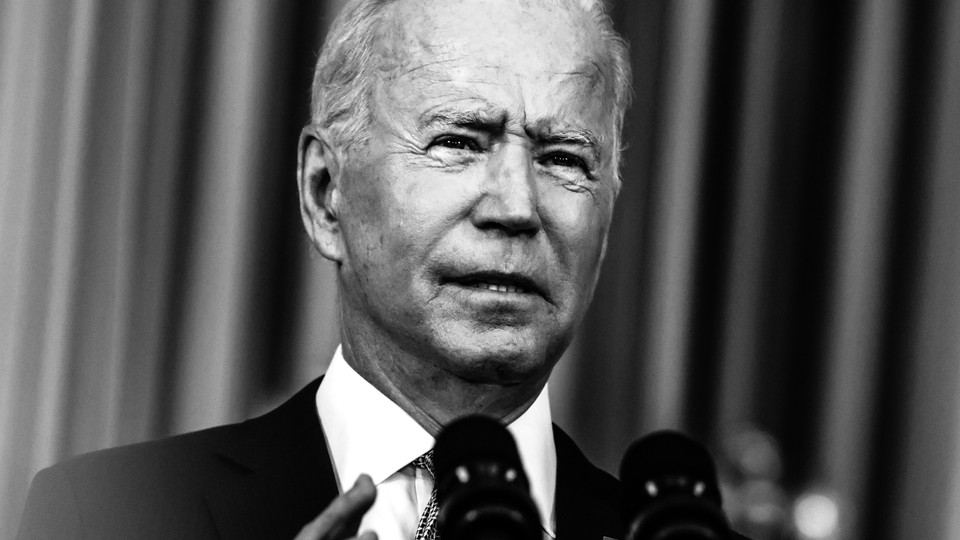