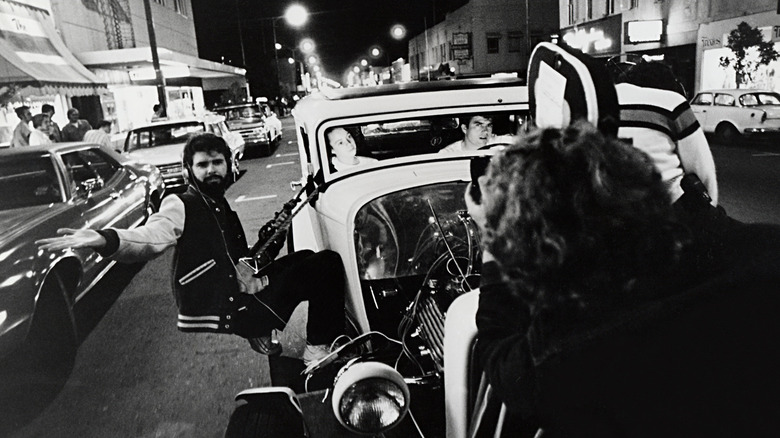 A cursory glance at the films of director George Lucas reveals that the sensation of speed is all over his work. It can be seen during the tunnel chase of "THX 1138," in the drag racing of "American Graffiti," and during the Death Star trench run and podracing scenes in his "Star Wars" movies. That's no coincidence, of course: as a young man growing up in sleepy Modesto, California, Lucas got into the drag racing fad of the 1950s in a big way. After a few years believing he'd grow up to be a professional racecar driver and gearhead mechanic, Lucas' life was almost lost during a near-fatal accident on the road. His survival of that incident not only changed the course of his life and career but caused him to become much more reflective and cautious about living life purely for danger, thrills, and passion, a theme that would find its way into much of his cinematic work.

A Fateful And Life-Changing Accident 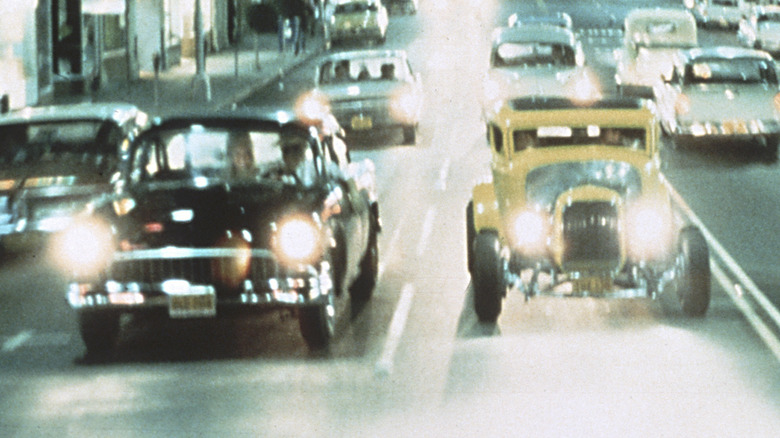 Growing up on the family ranch, Lucas first began tooling around town on a motorcycle before his father bought him a yellow Autobianchi Bianchina, a relatively safe vehicle which the young man immediately set to upgrading. The budding speed demon took the car to a local garage where he buffed up the engine and put in a racing belt, turning the Bianchina into a bullet of a vehicle not unlike the speeder bikes from "Return of the Jedi."  After competing in a few local races, Lucas believed he was well on his way to a professional racing career.

Then, on June 12, 1962, Lucas was heading back to his ranch home when a Chevy Impala rushed in and broadsided Lucas' car, flipping it numerous times before it finally smashed against a tree. Lucas was injured: his lungs were bruised from hemorrhaging and he needed medical attention. However, thanks to his racing seatbelt snapping during the crash, Lucas had been ejected from the Bianchina right before the car hit the tree, saving his life.

Upon his recovery, Lucas knew that he "was at this sort of crossroads." As he looked back on the incident in June of 1999, the accident making him realize "what a thin thread we hang on in life, and I really wanted to make something out of my life." So, Lucas took things one day at a time, viewing each new day after his near-death experience as "a gift." He began to study harder (before the crash, Lucas admits he was "a terrible student"), get better grades, and dive deeper into some of his other hobbies and interests, like photography. After photographing a few racing events, he met and befriended a fellow racing fan and aspiring filmmaker, Haskell Wexler, who was instrumental in helping Lucas attend the film school at the University of Southern California. The rest, as they say, is history. 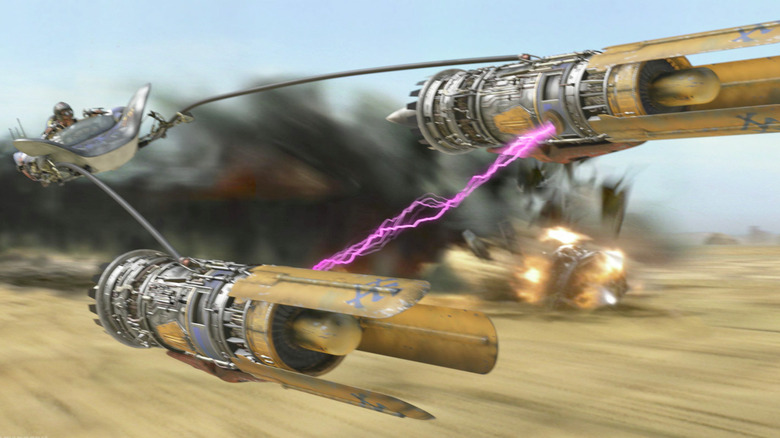 As seen in the aforementioned examples, Lucas kept up his interest in fast vehicles and speed-demon racing by writing and directing scenes featuring cool cars and wild spaceships in his movies. Yet his interest in racing wasn't the only element of his past to carry over, as his fateful accident found its way into his movies both directly and obliquely.

Easily the most obvious reference to Lucas' pivotal accident is in "American Graffiti," a movie which Lucas pointedly sets during the late summer of 1962. In the climax of that film, John Milner (Paul Le Mat) is finally goaded into drag racing against the blowhard Bob Falfa (Harrison Ford). John wins the race, but Bob's car topples off the road when his tire blows out, nearly killing him and his passenger, Laurie (Cindy Williams). Upon seeing the near-tragedy, Milner has second thoughts about his life as a local racer. Yet an on-screen epilogue states that John will be killed by a drunk driver in 1964. In the sequel, "More American Graffiti," it's revealed that John went on to a brief professional racing career, clearly having devoted his life to the sport just before it would be cruelly taken away by a fateful collision. Lucas uses John as a cautionary "what might have been" look at his young self, believing that a life devoted to cars and the road will eventually take a toll.

One might think that Lucas' "Star Wars" saga would have little to do with his real-life past, but questions of destiny, fate, recklessness and tragedy are all over the space fantasy films. Apart from the obvious correlation of young Anakin Skywalker (Jake Lloyd) being a podracer (a sport which is so dangerous it's a wonder any human or alien walks away from it alive), there's the roguish Han Solo (Harrison Ford), whose own beloved jalopy the Millennium Falcon gets him into trouble and nearly killed more than a few times. There's also the impetuous and reckless Luke Skywalker (Mark Hamill) and his father Anakin Skywalker (Hayden Christensen), both of whom Lucas reveals to be blinded by ambition and false confidence when they were each a teenager.

It's clear that, given Lucas' past, the man implemented these characters and themes within his movies to examine how close he came to death and still miraculously managed to avoid that fate. Given the fact that his films present vehicles and the sensation of speed as beguiling and exhilarating, it's not like Lucas turned his back completely on his love of racing and cars. Instead, he tempered his once fiery passion with cool, sober maturity and reflection, acknowledging the joy they can bring while never forgetting their inherent danger. As Master Yoda puts it in "The Empire Strikes Back": "Adventure. Excitement. A Jedi craves not these things." The real George Lucas learned the hard way how to indulge such cravings without succumbing to them.

Read this next: The 12 Best Star Wars Books Ever Written