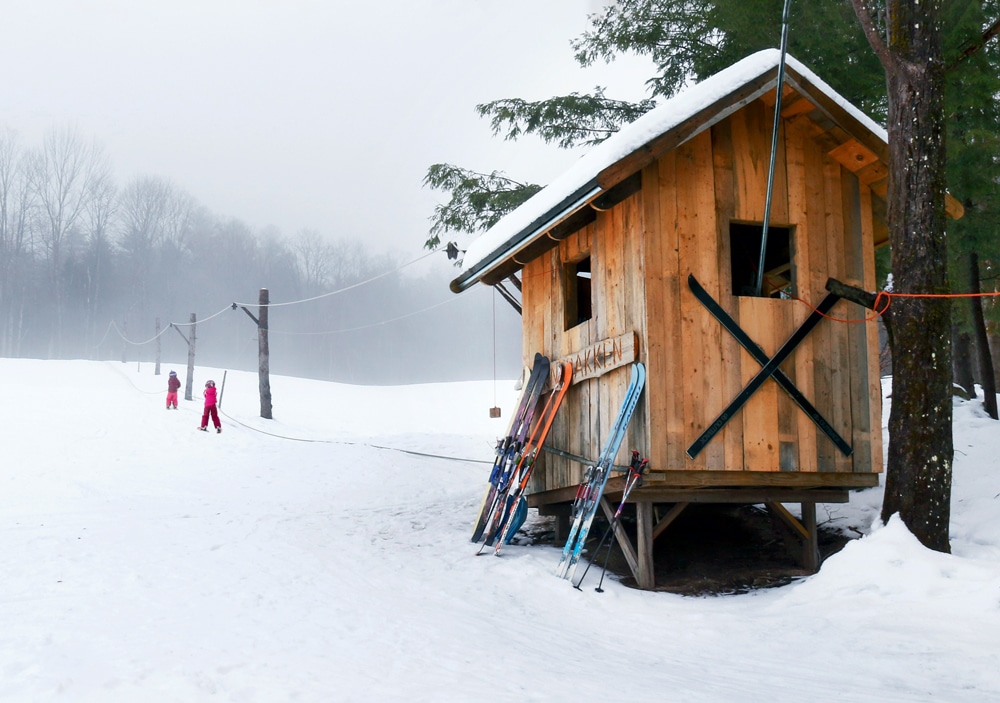 The layer of slick, wet November snow coating our familys humble Vermont hillside was hardly enough for skis to slide on. So it was with well-worn work boots on my feet that Ireached for the rope to test our homemade ticket to backyard-skiing paradise. Having just spliced together with my neighbor Andrew two sections of -inch-diameter rope into a single 1,000-foot loop, I seated the rope around the rear wheel of an old riding lawn mower and, for the very first time, fired up our backyard rope tow. I leaned back, pressured my heels, tightened my grip on the ascending line of the ropeand was yanked into a semi-controlled bout of world-class boot skiing before dropping the rope 50 feet up the hill and proclaiming, It works!

My brother-in-law, Richard, showed up just in time to witness the momentous occasion, and he offered to help. Grab your skis, I suggested, half jokingly. Its going to be a fun winter. But unless soggy grass and wood chips is your thing, skiing was not recommended just yet.

Besides, we still had some fine-tuning to do before the long season ahead. So we got to work. We had an emergency shutoff to install, some securing of the motor to complete, and, most important, a sign inspired by our daughter Maiana that read Barnebakken (Norwegian for kids hill) to carve and attach to the side of the tow shack. For added motivation, wet snowflakes continued to fly all afternoon.

For nearly 20 years, my wife, Emily, and I have done cross-country and backcountry skiing on and around our property in the Mad River Valley. But it wasnt until we logged a crowded stand of red pine trees behind our home in 2017 that the idea of installing our very own rope tow took hold. We were intrigued by how building our own lift up a snowy hill might make the sport even more fun, social, and accessible. Now, with our two young daughters, Maiana and Lenora, and several of their young cousins nearby, our hunch was that the investment required to get a rope tow up and running would pay off for years to come.

Logger Rich Hallstrom chuckled when he saw me flagging a straight line of red pines behind our housetrees we wanted left behind as 12-foot-high stumps, the future towers for our tow. They would serve as mounts both for lights and for the return wheels that guide the rope back down the hill, among other functions.

I cant say Ive seen this on a job before, Rich said. He chipped away at clearing five acres of trees through the winter of 2017, revealing a southwest-facing hillside that was once home to flocks of sheep and even some cattle. Stone walls line the north and south sides of the hill, and thanks to the hard work of earlier generations, theres hardly a rock larger than a plum out there. It was on hillsides like this one that mechanized ski areas got their start in the first half of the 20th century, when rope tows were relatively commonplace across New Englands snow country.

In late spring, we used the proceeds from the logging to grind the stumps in place and to buy pasture seed, which we spread by hand. Over the summer, our family constructed a simple shack at the base of the hill to house the motor, installed a return wheel at the top of the hill, and sourced a few other ingredientsan old riding lawn mower, bits of hardware, and rope, of coursesome of which was passed along to us by our friends Angus and Kricket McCusker. The McCuskers have rope tows in both their front and back yards, and time we had spent skiing their tows together was the final dose of inspiration we needed.

After my proud test run on that snowy November afternoon, flakes piled up overnight, and in the morning Emily and I headed out for our inaugural runs on the Barnebakken. Donning sturdy leather gloves, we grabbed the rope and in just 35 seconds were whisked 500 feet to the open views and breezes of our hilltop.

Within a few runs, it was clear we had created something magical. I cant believe we have our own ski area! Emily said. 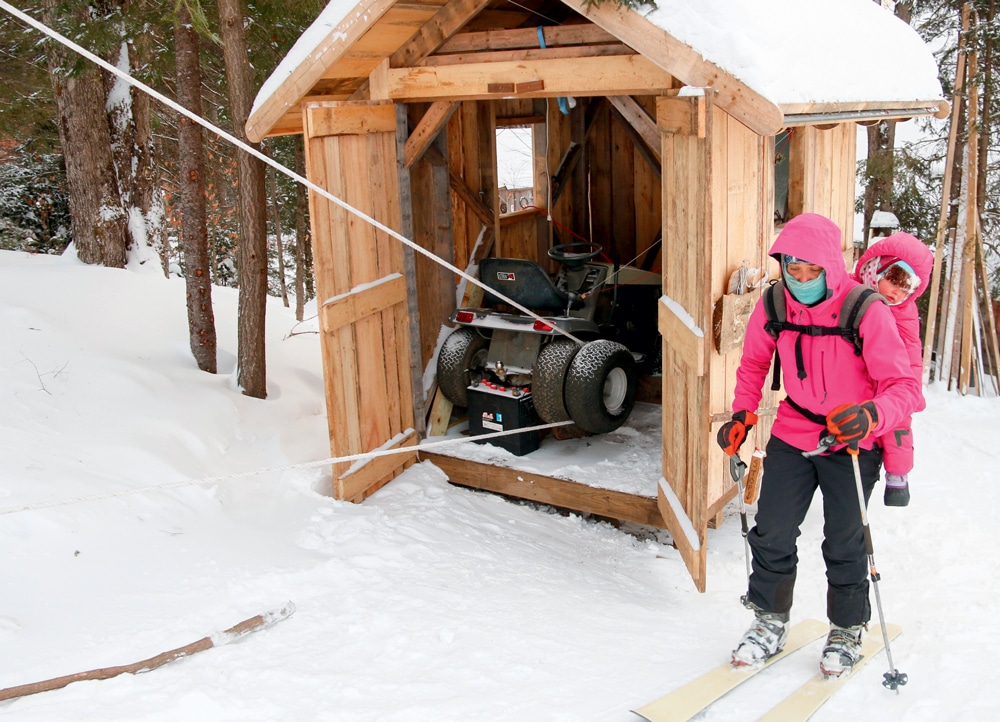 Mom Emily and daughter Lenora set off from the Barnebakken on a few human-powered laps.

Later that day, family friends Brennan and Forrest, with whom we have skied extensively in New England and across the Arctic, stopped by with Forrests 4-year-old son, Heikki, for a few runs. Together with our girls, we enjoyed half a dozen runs on the hill under a warm late-November sun. As our kids were getting the hang of holding the rope, wed ride behind them to assist. Emily proceeded to lay fresh tracks down one untracked portion of the hill after another, while Brennan kept an extra set of eyes on the kids and the tow. It was just the first day into life on the Barnebakken, and we had already set in motion something truly special for our family and friends. A few laps on the tow before heading to Grandmas for dinner? Sure. Skip the big mountains when the wind chill is 30 below, and ski a couple of runs before some hot soup around the woodstove? You bet.

Before long, spinning the towor Coco, as we named our mower and motorbecame second nature, and usually spontaneous: during lunch breaks from work, after school, aprs-dinner, under the winter moon. Why not? We set up a cozy fire pit with benches at the base of the hill, and fire-roasted Barnebakken Burgers were born. Marshmallows were toasted. Jumps and whoop-de-dos took shape all over the hill, providing endless entertainment for all ages. 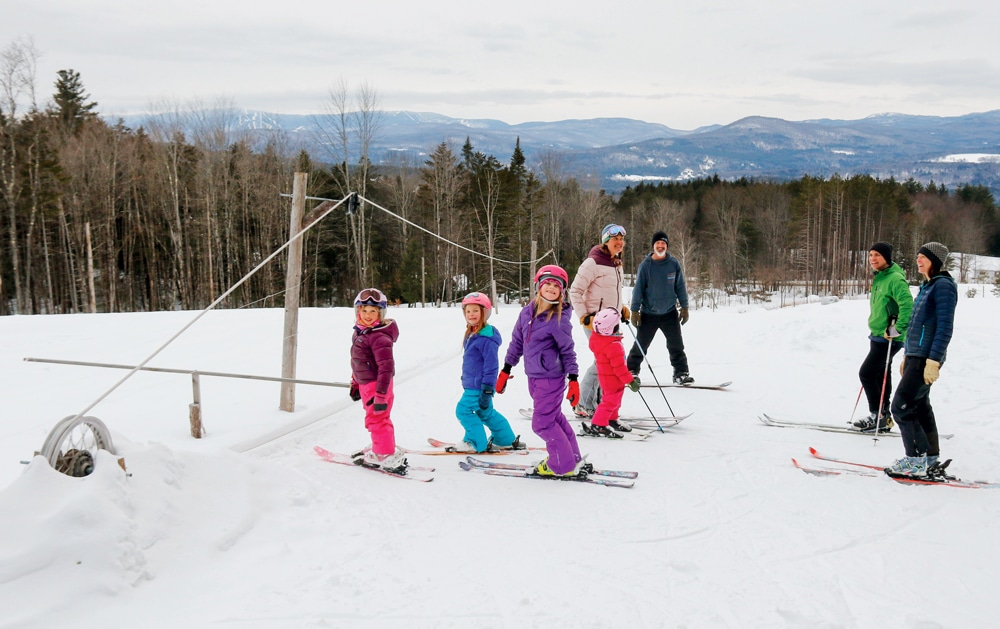 Daddy, lets make a hundred whoop-de-dos! suggested 3-year-old Lenora this past winter. Increasingly, we witnessed the girls and their visiting ski buddies becoming immersed in a continuous and fun-loving flow of skiing motion that would keep up for a handful, a dozen, or even 20 runs, as 5-year-old Maiana proudly claimed one day.

It was a warm, rainy Saturday morning last spring when we finally called it quits for the season. The fun was not so much in skiing the leftover areas of snow, but rather in skiing the growing grassy patches and puddles between them. In an hour, the kids were properly soaked and muddied. 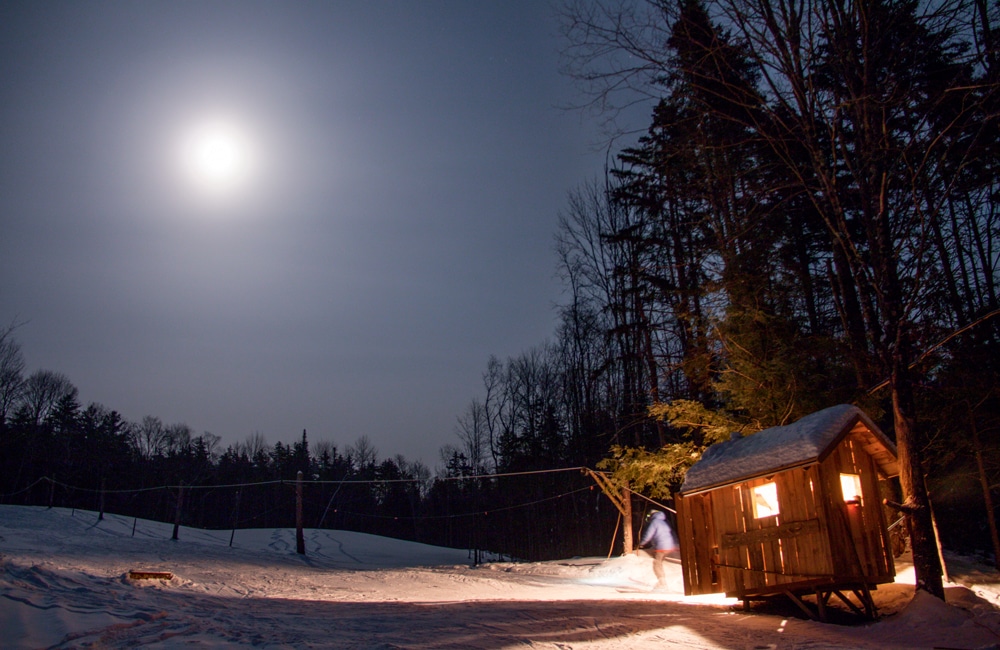 When youve got your own ski lift, its hard to pass up a few moonlit runs on a calm winter night. Initially powered by a neighbors hand-me-down belt-driven riding mower, the Barnebakken today hums along thanks to a more powerful shaft-driven mower nicknamed Coco.

We gathered after one last tow up top. The girls leaned against the shutoff gate, gave it a good push, and that was it.

Under a drenching rain, we skied for the comforts of home below. Kicking off our skis, we wondered if it might snow just once more before summer, or if it was simply time to roll Coco out of her shack and start mowing the lawn.