Nobody expects to stare death in the face only to find out their entire life is a lie.

When marketing executive, Becky, is saved from near-death by Salco, she is taken to a magical world filled with peaceful people who are trying to forget their land is on the brink of destruction.
Becky discovers that her arrival is no accident and that she is, in fact, Thya, heir to the enchanting land. As if that isn’t enough, she learns that an Oracle has prophesied that she will save the gentle Tsinians from slavery and domination by Darthorn, the Warlord of Senx.
The Tsinian council and her kinsmen are certain that a union between Darthorn’s son, Kovon, and Thya will create peace between the two lands. However, Darthorn has plans for Tsinia, as does Kovon for Thya, and neither are good.
Her future has been written and if she is to save Tsinia she must marry Kovon, but Thya gives her heart to another — a love that is both forbidden and dangerous.
Illusional Reality is a story about hope, courage, love, and sacrifice.
Book Links: 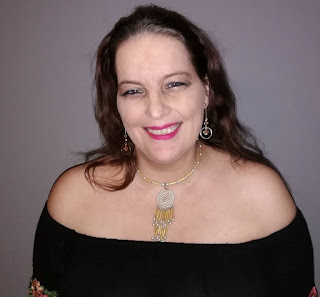 Karina Kantas is a prolific author of 13 titles. Including the gritty MC thriller series, OUTLAW and the exciting YA fantasy duology, Illusional Reality. She also writes short stories and when her imagination is working overtime, she writes thought-provoking dark flash fiction.

There are many layers to Karina's writing style and voice, as you will see in her flash fiction collection, Heads & Tales and in UNDRESSED she opens up more to her fans, giving them another glimpse into her warped mind.
When Karina isn't busy working on her next bestseller, she's a publicist, author manager and VA. She's also the host of the popular radio show, Author Assist on the Artist First Radio Network and host of the YouTube show, Behind The Pen.
Karina writes in the genres of fantasy, MC romance, Young Adult. sci-fi, horror, thrillers and comedy, romance, PNR, dystopian and erotica.
Author Links: 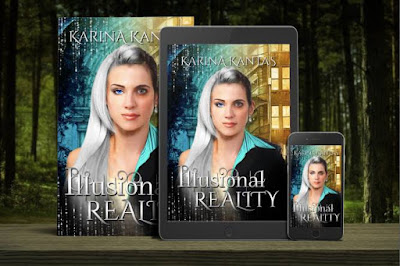 This is amazing,” she squealed. Didn't every girl dream of meeting their Prince Charming? It was such a vivid, peculiar dream that it was almost frighteningly real.
A gentle tap on the door got her attention. “Come in.”
A lovely brunette girl entered. She wore a dull-coloured robe with a grass belt, and her long, brown hair was neatly tied back. A cream silk dress hung over her arm. The young Tsinian curtsied before approaching Becky. Taking Becky’s hand, she led her to a stool next to the mirror. She watched carefully as the girl began to dress her hair.
“You're very quiet,” Becky said. “You either can't speak or have been ordered not to. It doesn't matter which. So, this place is called Sidinia?”
“Tsinia,” corrected the girl before she quickly covered her mouth.
Becky turned around. “Ah! So, you do speak.” She laughed. “It's okay; I won't tell the old man. What's your name?”
“Kezar.”
“How old are you, Kezar?”
“Old? I do not comprehend.”
“How many years of age are you?”
“I do not recognise what you mean.” Kezar bent her head, as if she were ashamed of not being able to understand.
Becky realised she would have to explain herself if she was to make Kezar cheerful again. “Okay, when you are born, you live one day, which makes you one day old. When you have lived eight years, you are eight years old. Understand?”
“I believe so,” Kezar replied as she continued dressing Becky’s hair. She braided the sides and pinned them to the back of Becky’s head while she let the rest of the hair hang loose. Kezar stood Becky up and began undressing her.
“So,” Becky repeated, “how old are you?”
The girl stopped what she was doing and considered. “I am not acquainted with this. We do not embrace year or day.”
“Really? That's so weird. Well, I'd say you look about eighteen.”
“You will not sight many Tsinians younger than I,” Kezar said.
Becky was curious. “Oh, why is that?”
Kezar explained. “When we are born, we are an infant for a short while, a day, I believe you name it. Then on our second birthday, we become at an age” – Kezar checked to see she had said the word correctly, and Becky nodded – “at an age when we are intelligent enough to master the code and arts. Tis a short while since I first commenced.”
“Are you telling me there are no children here?”
“Tis true. I beg of you; do not convey to Omad that I have conversed with you. Tis not my place.”
“This is incredible. You know, the worst thing about having a child is the dirty nappies,” she joked.
Kezar looked at Becky blankly.
“Oh, never mind, you wouldn't understand.”
“I have concluded,” announced Kezar. “You are prepared.”
Becky stood up and admired herself in the mirror. She certainly looked like a princess. Her hair was beautifully pinned, and the silk dress reminded her of a Roman toga. The front hung modestly and tied around her waist was a gold-coloured rope.
She sighed deeply, wishing she could look this way when she awoke. Men would fall at her feet. She twirled around, swishing the long skirt from side to side.
“You are beautiful, Thya. You have the appearance of a true Ganty.”
“What's a Ganty?”
“Tis the title of your ancestors. All rulers of Tsinia are named Ganty. 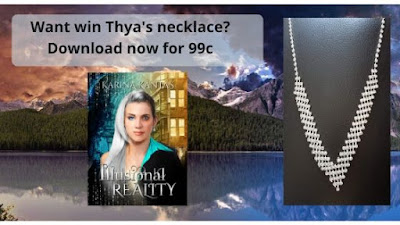