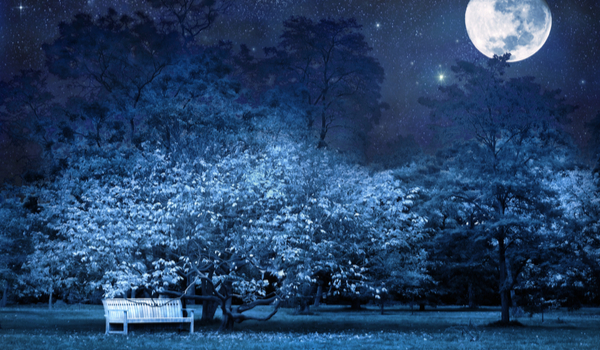 We are like islands in the sea, separate on the surface but connected in the deep.

William was single, in his mid-thirties, had recently moved to a new town, and worked out of his apartment as a freelance graphic designer.   Most of his close friends were drifting away due to marriages and relationships, children being born and raised, and escalating job pressures.  He was not particularly tight with his family.

As a result of this confluence of non-connection, William was lonely.  So when he heard that a nearby community center hosted a “Saturday Night Social” each week,  he summoned his courage, shoved aside his natural shyness, bought some new denim jeans and a matching Untuckit shirt to wear, and went to the party.

The community center was a large, rectangular building.  The exterior walls were painted dark blue, while the entrance doors were a shade lighter.  Once he pushed through them, he was greeted by a woman of around his age.

She looked him over for a moment before speaking.

“Is that an Untuckit shirt?”

“Nice.  Looks natural.  Like you meant to have it hang over your belt.”

“Thanks.  I guess that’s the concept.”

“I suppose you’re right.  Are you here for the social?”

William hadn’t noticed, but she was holding a clipboard.  She snatched a pen from behind her ear and started asking him questions in rapid fire.

“Are you single?  Dating?  Married?  Divorced.”

“Why do you need to know that?”

She lowered her clipboard and blinked at him before answering.

“You don’t have to tell me if you don’t want to.  But you can only come in if you answer all the questions.  That’s our policy.”

William looked over her shoulder.  There was one more set of doors past the lobby.  Inside, he saw, was packed with people.

“One more. Do you have a preferred nickname?  If you don’t, we can assign you one.”

“You have to go by a nickname once inside.   That’s policy as well.”

“Well, most people I know call me Will.

“I’m afraid that’s too close to your real name.  And it’s only four letters.  I should mention we need a name that’s over six letters, and also, it’s best if you include either a number or a grammar mark, like an exclamation point.

She started to look frustrated.

“I’m going to go ahead and give you one.”  She did a fast scan of her clipboard. “How does ‘Untuckit35’ sound?”

“But can you live with it?

“Perfect.  Once inside, anyone asks you, that’s the name you give.”

She didn’t answer, as she was already looking past him, to a couple coming through the door.  He took it as a cue to move on and went through the next set of doors.

William was surprised by how loud the room was, but also how disconnected was the noise from all the disparate talking going on.  The space was open and without walls, but people were settled more or less in defined groups.  In the larger groups, he noticed, one person stood in the middle, encircled by others, sometimes two to three rows deep.

He weaved through the room, listening and seeing where he might make an introduction or find an opening to join.  Finally, he came upon a group of five people – two women and three men – who seemed more approachable.

“Of course you can,” said one of the women, stepping out of the group to meet him.  “What’s your name?”

“It was assigned to me.”

She paused for a moment.

“Just to let  you know, we’re only talking about birds of prey this evening.”

She made a flapping motion with her arms.

“You know, hawks and eagles and that sort of thing.   That’s our connecting conversation.  We were just discussing the Northern Shrike.  It’s nickname is the “Butcher Bird” because it impales its catch on spiky plants or barbered wire fences.”

“Ouch.  I’m sorry, I don’t really know much about birds, except that I hate pigeons.”

“Well, maybe there’s an anti-pigeon talk going on somewhere in the room.  You never know.  It does take all kinds.”

William, starting to feel uncomfortable, continued on.  But he didn’t have any more success in meeting people or making friends.   In addition to most groups having a set criteria for discussion that excluded him, the few people he did manage to talk to seemed more intent to just tell him things – listing out, as if on auto-pilot, what they liked to do, or what they have done, places they’ve visited, and where they would like to visit.  One gentlemen even provided a detailed description of his week’s meals, a daily breakdown of breakfast, lunch and dinner, including caloric content and flavor gradients.

It made William dizzy and disoriented and even more detached than usual.  A few times, he even felt defensive, as individuals, usually standing on the fringes of a group, shouted out random accusations at him, usually in short, measured sentences.  Some held up elaborately-designed posters, giving image to their exhortations, or played music from portable boom boxes to reinforce the message.

Finally, his nerves frayed, William made a hasty exit.

“I hope you had a good time, Untuckit35?” the woman greeter said as he sped past her in the lobby.  “Please come again.  You don’t even need to check in next time.  Easy entry.”

He pushed through the last set of doors and was outside.

It was a pleasant, clear night, and the moon was full and gave enough light for him to find a park bench in a pocket park a few blocks away.  He sat and tried to calm his breathing.  After a few moments, an elderly man, aided by a cane, strolled by with his dog on a leash.  He eyed William and smiled.

“Do you mind if I sit down with you?” he asked.  “We always take our break here.”

William slid over to a side.

The old man sat with a pleased grunt.  The dog, a small poodle variety, did the same near his feet.”

“Nice evening.  But they say it’s going to rain later.  We could use it.  The plants, that is.  You garden?”

William was surprised by the directness of the old man’s question.

“You have a balcony?”

“Well, that’s room enough.  If you get some sun, put some herbs in planter.  Or tomatoes or peppers in a few pots.  It’s fun to watch them grown, and vegetables always taste better when you pick them yourself.  Anyway, that’s one of my hobbies.  Gardening.”

“It keeps me occupied.  That and walking my friend here.”

They were silent a moment.

“Do you have any hobbies?” the old man broke the quiet.  “If you don’t mind me asking.”

“Probably not enough.  I mean, I should get some.”

“Like what?  I’m sorry to pry, but I enjoy learning about people.  It’s another hobby, I imagine.  But I can’t tell you how many friends I’ve made, good friends, over the years, just by asking them questions about themselves.”

For some reason, William’s throat suddenly constricted and his eyes watered.  He did not understand why he was feeling so emotional all of a sudden.

“I’m afraid I’m not very interesting,” he finally got out, wiping his eyes fast with the back of his hand.

The old man reached over and playfully tapped William’s shoe with the end of his cane.

He slowly stood up from the bench.

“Anyway, time for us to keep going.  We circle the park four times before calling it quits.  Takes us an hour exactly.   Thanks again for sharing the bench.  And for the talk.”

“I enjoyed it all the same.”

William watched as the man cajoled the dog to stand up and started to move away.

The old man turned and smiled.

“That would be nice.  But I warn you, we move slow.

William stood as well.   He came beside the man and the dog.

The man told him.  And as they walked around the park, four times, they talked and laughed and somehow, without much effort, or any plan, became friends.   And William did not feel as lonely as before.

The post Out With the New, In With the Old appeared first on The Good Men Project.