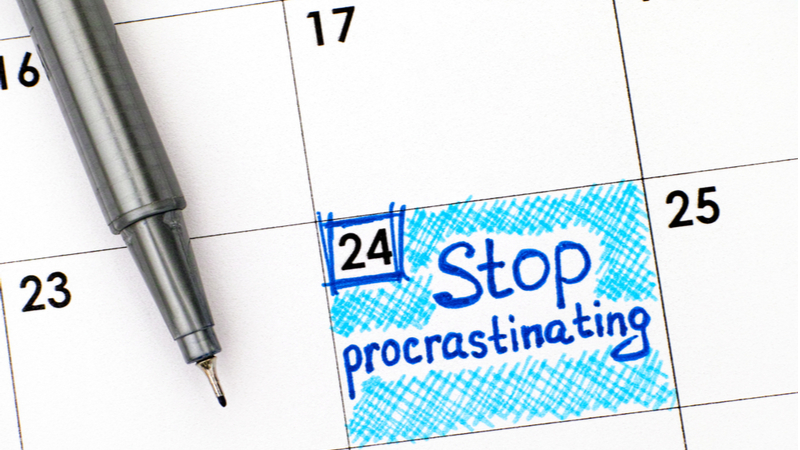 Jerry Seinfeld is a co-creator and co-writer of the popular show Seinfeld. He is regarded as one of the best comedians of all time.

So, what does Jerry Seinfeld do to beat procrastination? Brad Isaac tells us what Seinfeld told him during his encounter with him.

Seinfeld Strategy to Beat the Procrastination

Software developer Brad Isaac told Lifehacker about the productivity advice he got from Jerry Seinfeld.

At the time when Jerry Seinfeld was a touring comic, Brad found him backstage and asked him if he had any tips for a young comic.

Seinfeld told him about a calendar system that we can use to motivate us even when we don’t feel like it.

“He told me to get a big wall calendar that has a whole year on one page and hang it on a prominent wall. The next step was to get a big red magic marker. He said for each day that I do my task of writing, I get to put a big red X over that day. “After a few days, you’ll have a chain. Just keep at it and the chain will grow longer every day. You’ll like seeing that chain, especially when you get a few weeks under your belt. Your only job next is to not break the chain.”

“Don’t break the chain,” he said again for emphasis.”

So how can we use Seinfeld Strategy to beat procrastination?

It’s not about the big tasks you do once or twice a week or even months. It’s about doing little, every day and that will make a difference.

There are various benefits to this approach-

Doing tiny little work daily is easier than motivating yourself to do the bigger more exhausting tasks. This way you can build consistency. Remember what Jerry Seinfeld said- “Don’t break the chain”.

Small daily improvements lead to large improvements over time. It works like compound interest. You want to read a book. Start by reading 10 pages per day or 5 pages or 1 page or 1 paragraph, whatever you can do right now.

Building a habit is difficult. You need to make neural connections in your brain to be able to build a habit. Your brain forms neural connections based on what you do repeatedly. And to build a daily habit, you need to be consistent in your approach. In short, building a habit is about showing up. Just showing up and doing the little work every single day.

This is how you beat procrastination.

You might feel bored at some point but being consistent is how you produce great work. Seinfeld’s strategy isn’t about how motivated you are, it’s simply about sticking to the process every day even when you don’t feel like it. Embrace Boredom to beat procrastination.

Remember to choose a task that is simple enough to repeat the process daily and meaningful enough to make difference in your learning. This way it gets less boring and you seem to finish the work and build habits.

For me, it’s about building the habit of writing and becoming good at it. For this, I chose to write daily and reading daily.

I didn’t follow through on that too. But I am trying to write articles daily and publish stories on Medium. I write daily but I don’t publish daily. I am little conscious while publishing.

But I have a goal to publish at least 100 stories in 100 days and I hope I achieve it. I will share my experiences once I am successful at it.

You may also like these posts on The Good Men Project:

Join The Good Men Project as a Premium Member today.

All Premium Members get to view The Good Men Project with NO ADS.

Log in if you wish to renew an existing subscription.

By completing this registration form, you are also agreeing to our Terms of Service which can be found here.


Need more info? A complete list of benefits is here.

The post How To Stop Procrastination by Using “Seinfeld Strategy” appeared first on The Good Men Project.