Everyone wants the elusive “six pack.”

The hallmark of the fitness elite, the proof that you know the “secrets” of getting ripped.

And, like anything that’s highly sought after (money, fame, beauty, viable exit strategies from Afghanistan), there’s a long list of charlatans offering up spurious advice on how to snag this brass ring. Case in point:

In reality, the best way to get a 6 pack involves combining several of these strategies. Specifically, reducing your body fat percentage, doing the right types of ab exercises, and eating enough protein.

And in this article, you’ll learn exactly what you need to know to implement all of these steps properly.

How to Get Abs: The Most Common Mistakes

No matter how simple or fancy the exercises, only doing ab workouts is not how to get abs to show.

Yes, ab exercises are necessary for developing a solid core, but it takes more than ab workouts to get the look you want.

2. Not being lean enough.

It’s true that you need to have low levels of body fat for your abs to fully show (under 10% body fat for guys and under 20% for gals).

But the reality is you can get very lean and still not have the “six pack” look you want.

That’s because nobody’s core is naturally developed enough to have the deep cuts and pronounced lines that make for a truly outstanding six pack.

Most guides on how to get abs recommend spending too much time on ineffective ab exercises.

Things like side bends, planks, and leg lifts are fine for improving your muscular endurance, but they aren’t the best ways to build abdominal muscle definition.  Instead, stick to proven exercises that allow you to effectively use progressive overload (more on this soon).

Quickly calculate your calories, macros, and even micros for losing fat and building muscle.

Your free stuff is on the way!

How to Actually Get Abs

Despite what most people say, the best way to get a 6 pack is actually pretty simple.

In fact, it mostly comes down to three things . . .

No matter how well developed your core muscles are, they’ll never “pop” if they’re covered by too much fat.

Get rid of the blubber, though, and, voila, a six-pack “magically” appears.

This doesn’t mean you should try to “spot reduce” your belly fat by doing ab exercises, though, because this doesn’t work.

Research shows that exercising a muscle group increases blood flow and lipolysis (the breakdown of fat cells into usable energy) in the area, but not enough to noticeably reduce surrounding fat stores.

What you can do, though, is reduce your body fat percentage.

That is, you can reduce the total amount of fat you’re carrying around, and this will inevitably cut into the fat that your abs are hiding behind.

So that’s your first goal: take your body fat percentage from where it is now to where it needs to be (below 10% for guys and below 20% for women).

And you’re in luck, because that’s easy to do. A bit of proper dieting, weightlifting, and some cardio is all it takes.

2. Do the right types of exercises.

To get a well-developed six pack, you need to include two types of exercises in your training:

By “heavy,” I mean using loads that are above 75% of your one-rep max, and by “compound” I mean exercises that train multiple major muscle groups, like the squat, deadlift, and overhead press.

You probably don’t think of these as “ab exercises,” but research shows they actually train the core better than many traditional ab exercises (and especially when heavy loads are used).

2. Ab and core exercises that you can overload.

And that’s where traditional ab and core exercises come in. When done right, they can make a huge difference in how your six-pack develops over time.

Out of the hundreds that you could do, all you really need are the following:

Each of these exercises allow you to safely train and overload all of your core muscles, and don’t require much in the way of technical skill, flexibility, or athleticism.

When we’re talking body composition, protein is by far the most important macronutrient.

The bottom line is high-protein dieting beats low-protein in every way, especially when you’re trying to lower your body fat percentage.

When you’re trying to get six-pack abs, though, the two main benefits of eating a high-protein diet are greater satiety (so it’s easier to tolerate calorie restriction and lose weight), and better muscle retention, which helps you avoid becoming “skinny fat.”

Specifically, you should eat about 1-to-1.2 grams per pound of body weight per day.

How to Get a 6-Pack: The Best Ab and Core Exercises

Why: The biggest benefit of the cable crunch is it’s easy to add weight to. Being able to add weight to “crunch” exercises increases their effectiveness and allows you to use progressive overload (which is the most important driver of muscle growth).

How to: Set the pulley on a cable machine to a high setting and connect the rope attachment. Grab one end of the rope in each hand and kneel down a few feet in front of the cable machine, pulling the rope down with you so that the ends of the rope are next to your ears. Lean forward slightly, and using your abs, pull your elbows towards your knees. Reverse the movement and return to the starting position.

Why: Like the cable crunch, the weighted sit-up is easy to add additional weight to, which allows you to effectively implement progressive overload.

How to: Lie on a sit-up bench with your feet wedged under the foot pads. Using both hands, hold a weight plate directly above your chest with your arms straight (or hold the weight against your chest with your arms crossed). Keeping your arms perpendicular to the floor and your back flat, use your ab muscles to lift your chest toward the ceiling until your lower back comes completely off the bench. Reverse the movement and return to the starting position.

Why: Research shows that exercises that involve bringing the pelvis toward the chest, such as the captain’s chair leg raise, are best for training the lower abs, which is important if you want to build an aesthetic six-pack.

How to: Position yourself in a captain’s chair station so your back is resting against the back pad and your forearms are resting on the arms pads, then grab hold of the handles and let your feet hang toward the ground. Lift your feet toward the ceiling, keeping your legs as straight as possible and your back pressed against the pad. Once your legs are slightly above parallel to the floor, reverse the movement and return to the starting position. 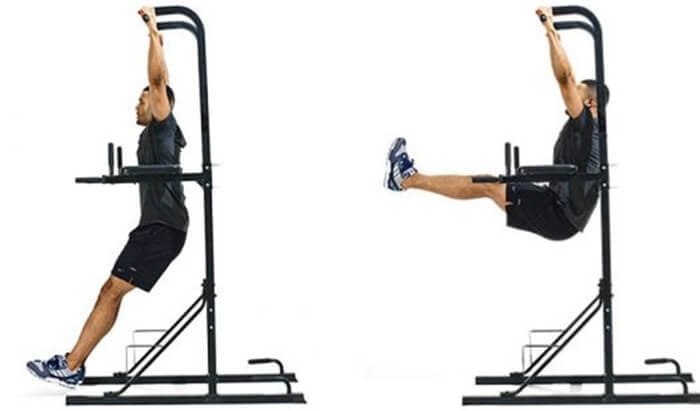 Why: Like the captain’s chair leg raise, the hanging leg raise is a great way to train your lower abs. In this case, however, your entire core has to stabilize your body and prevent it from swinging, which means it trains all the muscles of your abs and core harder.

How to: Grip a pull-up bar with your palms facing away from you and slightly wider than shoulder-width apart, then lift up your feet so that you’re hanging with your arms straight. Lift your feet toward the ceiling, keeping your legs as straight as possible and without swinging your feet or knees. Lift your feet as high as you can, aiming to get your legs slightly above parallel to the floor. Reverse the movement and return to the starting position.

Why: Research shows that the air bicycle is a fantastic exercise for training your obliques, which are the muscles that lie under your “love handles” and help frame your abs.

How to: Lie on the floor with your legs straight and your feet raised a few inches off the floor. Place your hands beside your ears and lightly touch your head with your finger tips. Using your ab muscles, lift your chest off the floor and bring your left knee toward your head. At the same time, bring your right elbow to meet your left knee. Reverse the movement and return to the starting position, then repeat on the opposite side. 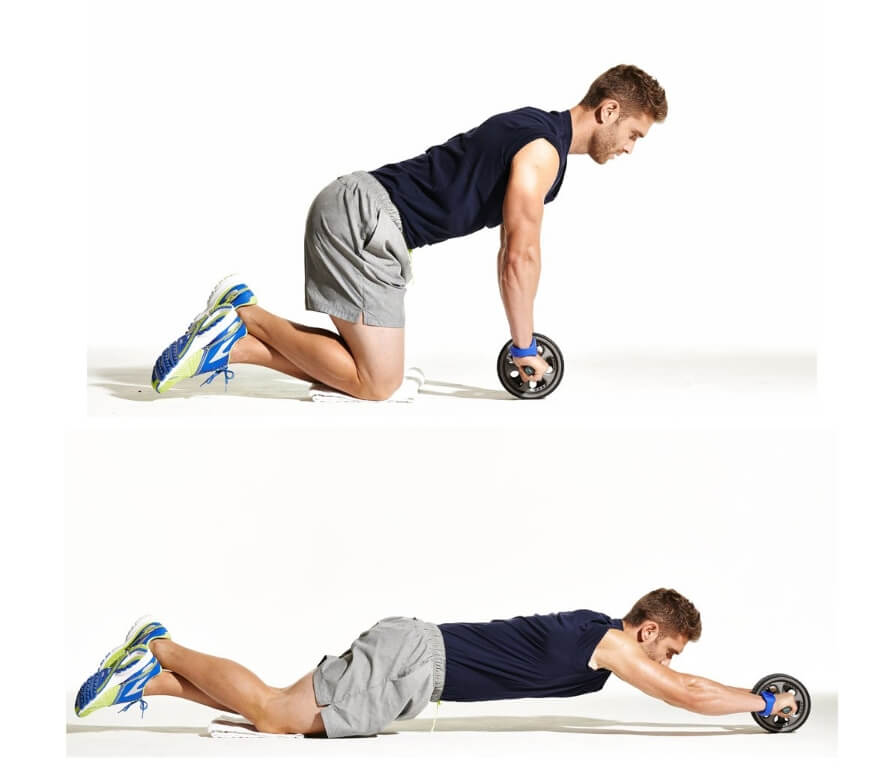 Why: Studies show that the ab wheel rollout is an extremely effective exercise for training all parts of the abs and core, especially the rectus abdominis and the obliques.

How to: Kneel down on the floor with an ab wheel in front of you. With your arms fully extended, grab the handles of the ab wheel and slowly roll the wheel away from you. Brace your core tightly so that your torso remains rigid and your lower back flat. Roll the wheel until your body is as close to parallel with the floor as possible then roll yourself back to the starting position by flexing your abs.

Tip: start with your knees and feet in contact with the floor, but as you get stronger you can cross your feet and lift them off the floor a few inches to make the exercise more difficult.

Getting abs mostly comes down to lowering your body fat percentage and training your ab and core muscles with exercises that help to make your six-pack pop.

Unfortunately, lowering your body fat percentage by any meaningful degree and developing your core muscles takes more than a week, especially if you’re starting from scratch.

If you want an accurate estimate of how long it’ll take to get abs based on your body fat percentage, take a look at this table: 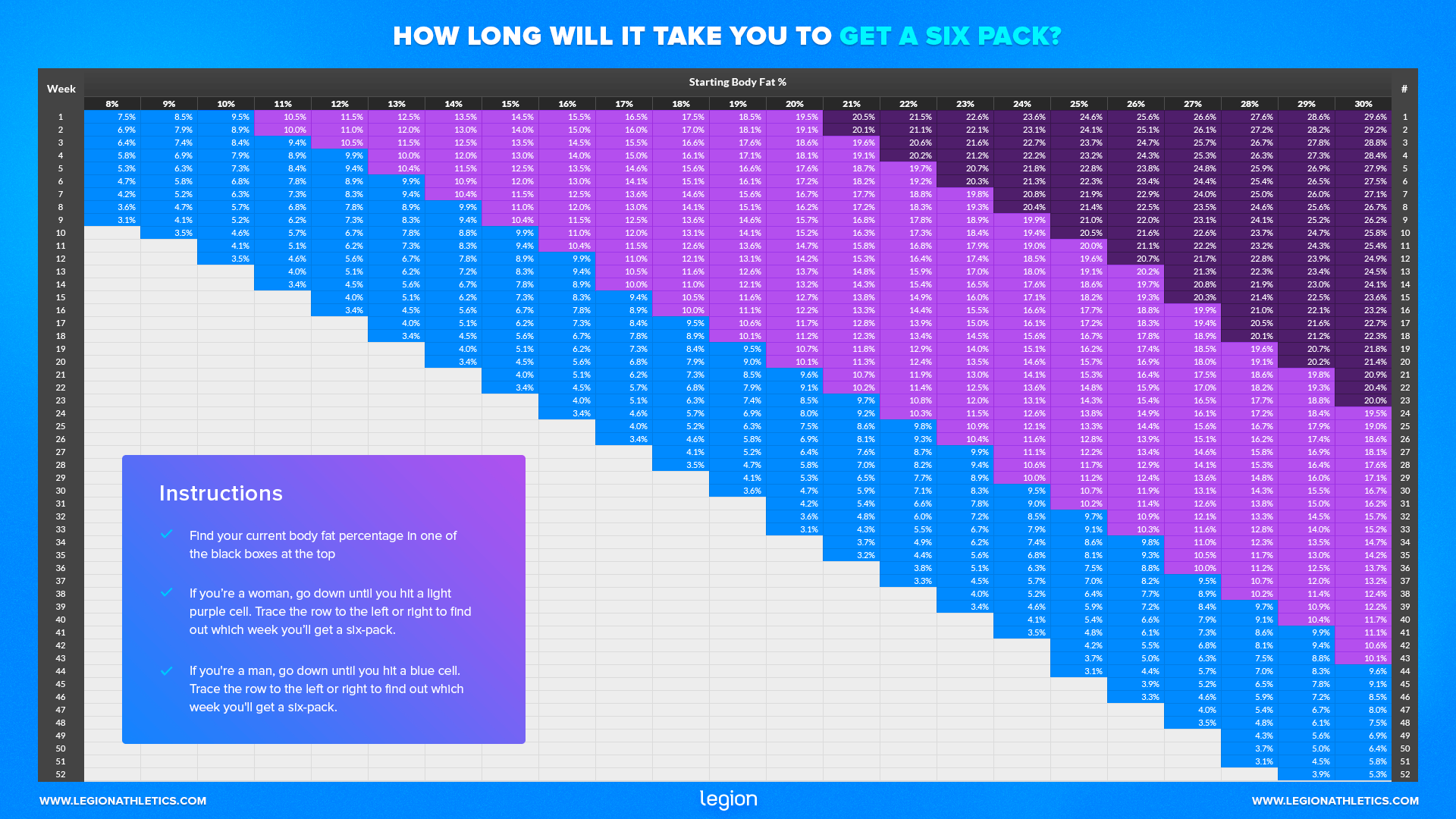 When it comes to getting abs, women don’t need to do anything different than men.

This means that women don’t need to lower their body fat percentage as much as men to have visible abs, because the fat they store tends not to accumulate on their stomach and obscure their six-pack.

For some people, belly fat (and particularly belly fat below the navel) can be particularly stubborn which can obscure your lower abs even when your upper abs are well defined.

There are a few techniques you can use to get rid of stubborn belly fat as quickly as possible, but for the most part it comes down to maintaining a calorie deficit for as long as it takes to get your lower abs to show.

Once the belly fat is gone, however, the best exercises to bring your lower abs out are exercises that bring your pelvis toward your chest, such as the captain’s chair leg raise and hanging leg raise. (Again, these aren’t essential if you have a year or more of heavy, compound weightlifting under your belt, but they won’t hurt, either).

The post How to Actually Get Six Pack Abs appeared first on Legion Athletics.