No, not the Disney movie, the water in the birdbath.  I knew that there was the possibility of frost but didn't expect the birdbath to freeze.  All of the roofs were white this morning and there was thick frost on the soil in the pots on the patio.  (and why is it "roofs" instead of "rooves" like "hoof" and "hooves"?)  It's May 8, time for frost to be past. 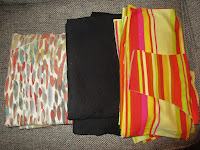 It came to me when I was whining about having cabin fever last night that the happiest I've been lately was sitting downstairs sewing that shirt and leggings a couple weeks ago.  So I dredged up some fabric and cut out clothes I don't need.  The fabric on the left is for a Dress no. 1, my sleeveless jumper of a uniform.  In the middle is black polyester gabardine to make a Dress no. 1 LBD.  I don't have a black dress and when I found this fabric last fall I knew it was the perfect thing.

On the right is cotton knit for a long-sleeved tee shirt.  The only problem is that I didn't look at the pattern layout before I cut out the first piece on the fold and didn't remember that I had to refold the fabric to have enough for the sleeves.  I had enough for one sleeve with the stripes running around like the body but not enough for two.  But I did have enough to turn the pattern piece and cut one sleeve with the stripes running from shoulder to cuff.  Hopefully it won't look too stupid. 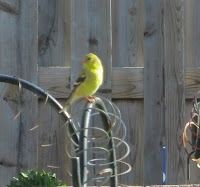 The goldfinches are here every day flaunting their bright yellow plumage.  I take their picture every chance I get. 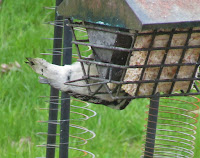 This downy woodpecker didn't cooperate.  It clung to the suet cage on the wrong side from where I sit and didn't change positions.


Since the only investment Manning had in the boat was less than a hundred bucks in gas and a few pounds of caulk, he thought that was a terrific idea. He spent an hour wandering the town and emptying out his gear from the cabin in the sinking boat, then after Oxford's shift was over, he and Oxford ran the boat down the shore to the boat launch where they met Oxford’s cousin Emile with his boat trailer.  It did not take the three men long to winch the boat up onto the trailer and drive it across the island to Emile's boat yard. Using a forklift and a canvas belt they then wrestled the boat onto a wooden cradle behind the shed where water proceeded to spill out of her bottom very slowly for the next few weeks.
The promised room above the workshop was adequate with a single bed, a row of hooks for clothes storage, a basin in one corner and a two burner gas stove in the other with a shelf with two plates, two mugs, a glass, a fry pan, a sauce pan, and various silverware above it.  Emile gave Manning a key to the workshop so that he could use the water closet and shower, the men shook hands and the deal was sealed.
Emile was smart enough not to ask for boat papers and Manning never mentioned them either. For transportation Manning found a rusty bike frame in the junk behind the shop, scrubbed it, greased it, and bought new tubes and tires. He wrapped an old towel over the seat a few times and secured the whole thing with half a roll of duct tape. He wire-tied a plastic milk crate to the handlebars and he was set.
Running tourists out to Klein was not a hard job. It took Manning about fifteen minutes to get the hang of it. The worst part of the whole thing was the name of the boat, Baca di Amor, which Oxford told him meant Love Cow. He was not sure he believed that was what it meant but he was not about to argue with someone who was paying him to drive a boat a half a mile, run up onto the sand, hand off a few tourists, boost a few back on, and head back to the dock.  Most of the passengers tipped him too. He learned to spot the ones most likely to tip and made sure to pay special attention to them. He always was especially nice to the mamas as he called them, those middle-aged dragons towing their sweet young daughters in their wakes. He knew that if he charmed the mamas it made getting close to the daughters much easier. Of course, he did not want to appear too respectable then spending an evening with him would lose all the spark of danger and adventure that those young women most desperately wanted to take home from their vacation. He wanted to be “that guy I met on the island” for as many women as he could handle.