The weather is starting to turn cooler, and our nights have been down in the twenties. I'm glad that we took time to get our outside chores done, even though I would have preferred to do some more camping in late October/early November.

Steve is finally feeling better from his head cold sinus thing of last week. Fortunately, knock on wood, I didn't get it at all! How is that? I always catch whatever he has. And I usually get it worse.

Well, as far as our French doors go, I had reached a point of indecision. We are waiting to get the electric power planer from Steve's Dad.  We need to plane down two of the sides of the doors so they can close properly in the allowable space.

In the meantime, as mentioned in my last blog, I decided to cover all of the shiny brass caming strips with a layer of brown fingernail polish. I painstakingly painted all of the thin brass strips on one door and it took quite a while. As it dried, it was looking pretty good. But the problem is that you can still see the shiny brass part where are the brass channel meets meets the glass. There is no way to get the fingernail polish in that channel. Plus, it doesn't look right. To me it looks "messy".

So I did what any good indecisive person would do, I removed ALL of the brown fingernail polish with acetone and cotton balls. What took me 4 hours to put on, came off in 5 minutes flat! Oh well, lesson learned.

Then I started calling a few stained glass shops and a window repair place. I asked them what could I use to tone down the bright brassy color. They said that there is a product that is called a "patina" that I could use. I looked around online and there weren't any specifically to make brass darker other than one that said it may age it somewhat, but it did more of a Verde green and not really a dark brown or a black. The other ones work for zinc, lead and copper --- or there were ones that would make things shiny! That was the opposite of what I was looking for, 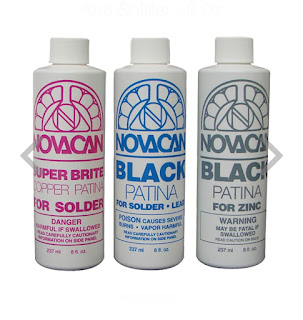 Then one person at a glass repair place (in my old neighborhood in Green Bay) suggested a gun product. It was used when they restored guns and wanted to make things brownish tarnished and blacker instead of shiny. It's also used for things like belt buckles or cabinet latches. It's a liquid that will ooze down into the channel grooves and not hurt the glass. He said to apply it with a Qtip and it will turn the brass a nice deep brown. He has used it to do exactly what I am looking for. It is sold in gun supply stores, and he has ordered it online.
I didn't want to wait, so I hoped to patronize a local business and buy it right away.
Well, I called at least over a dozen places that sold guns and nobody carried it. I called sport shops, gunsmiths, even shooting ranges if there was a gunsmith there. It was amazing the amount of customer service or lack thereof. I would call places and they would immediately say no they don't have such a thing. Or they would say I don't know. Call back another time. Or they would say I should just order it online because we don't carry it. Oh well, after wasting almost an hour on the phone, I decided to go on Amazon. There it is -- Boom  --  it'll be here Friday. No wonder why Jeff Bezos is so rich? 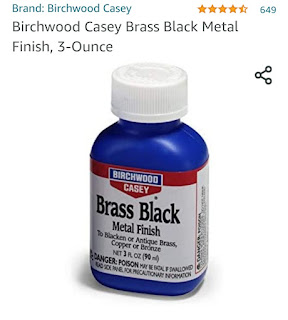 In the meantime, the doors are waiting patiently out on the sawhorses in the garage. Now that I removed all of the fingernail polish on one, I also went around on all four surfaces and removed any type of coating that might be on the brass caming. I know the doors look pretty the way they are but it would be the only thing brass in my living room. Everything else is oil rubbed bronze. That is why I am trying to change it.

With the acetone, I accidentally removed a couple spots of painted surface on the edges of on the freshly painted wood. So I touched them up. While I had my paint out, I decided to also paint the front door of the house on the inside in the livingroom. It had never been painted since we bought the house. The inner surface was the original primed steel which has a slight grayish color. Now it looks a lot of a lot better. It was something to do while waiting for the brass black product to arrive.
Note, the leading between the panes of glass
on this door are also black.

I'm not the only one that's being antsy. Mr Steveio kept talking and talking about the French doors and wanting to see how they would look. Remember, this is "HIS" project. So what did he do? He had to carry them into the house and stand them up! Even though they're a tad bit too wide for the opening, he kind of layered one over the other just to get the effect. He held them up from behind in the office while I took pictures from in the living room. 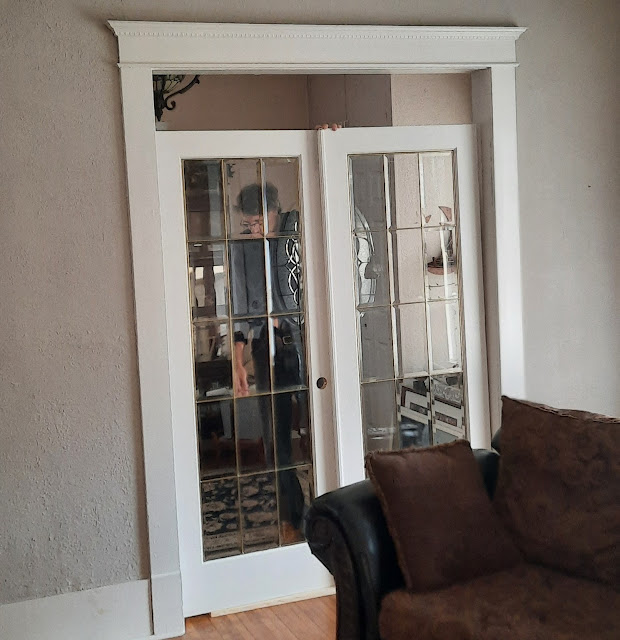 They are a tad bit too wide, but at least we get the idea. You can also see that my floor patching and staining worked out pretty well too. Once the doors are in place you really aren't even going to notice that the floor had ever been repaired

At the top where he is holding it, we will build a cross transom support board with some nice trim around it. We will put a horizontal piece of glass in there for now, but I am working on some stained glass that I am going to put together from a rescued vintage window. I'm going to put it together and place it up there, after I know the exact measurements. 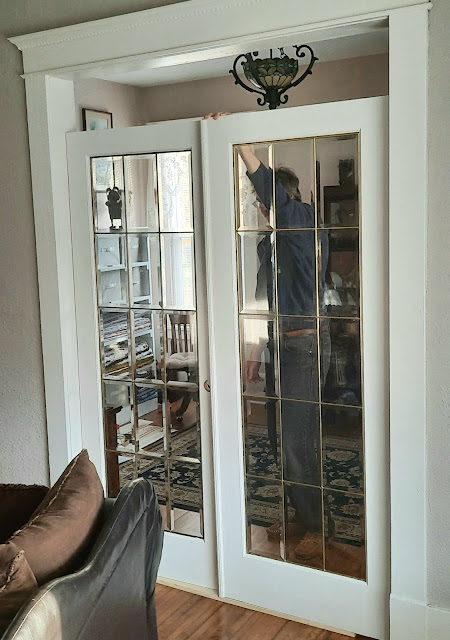 The opening is a bit out of square, so it will take a bit of fudging and planing of the wood to make the door not only fit the space, but meet at the top and the bottom evenly across as well.  Steve is good at that kind of thing.  I am just there to help hold things while he takes measurements and uses the level.
Steve also wanted to try out the other possibility of having the doors swing outwards into the living room, instead of inwards into the office. It's kind of a "Speak now or forever hold your peace" time.  LOL We either have to make them swing one way or the other way. Once the hinges and doorstop pieces are mounted into the door frames, it will be really difficult to change it.  We weren't sure if we wanted them to swing into the living room.

Speaking of artwork, I have four beautiful original watercolors by Bambi Papais that I have been meaning to put up. I wasn't sure if I wanted them in the living room or wanted to put them into the bedroom.

They're absolute favorites of mine. I got them from a lady when we went to her home to buy some lamps. She was ready to move and didn't know what to do with all of the extra artwork that she had to move. Some of it she did not want to package up for shipping across the country. She gave me a very nice price to take them off her hands. They're some of my favorite colors and of course my favorite fall season. We weren't sure exactly where to put them or how to arrange them so I made up blank pieces of paper the exact size by taping some together. Then we taped them to the wall in various arrangements in places around the house. We don't have a lot of wall space. We decided to put them back in the bedroom where they had been previously. But in a new space on a new wall.

Steve carefully tacked up the hanging nails and use the level to put them all back into place. I am glad they are finally put back up again.

I am glad they are there where we can see them from in the bedroom or from one walking through on our way to the master bath. We can even see them from the living room when sitting in the chair by the fireplace. They make me smile.

Today is a work day for Steve. He left early with his brother Pete to go up to Door County. Their Pops has a whole list of things for them to help with to get things ready for the winter season. They're carrying in firewood for the fireplace, and prepping all of his lawn and garden machinery for the winter. A quick check on the snow blower and arranging some of the needed supplies for winter are also on the list. I'm sure they will go out for lunch and come home sometime later this afternoon.
This evening might be spent with a couple of the grandkids coming over. Little Whitney and Claire were asking about making Rice Krispie bars. With sprinkles of course!
So we will see...
Share Share on Facebook Tweet Tweet on Twitter Pin it Pin on Pinterest