Do you remember that on day 10 of Blogtober I shared a few photos of vintage vehicles?  Today's post (and possibly two more... there are quite a few pics 😊) are thanks to my lovely Hubby (thank you sweetheart x) sharing his photos.   The photos were taken during his recent trip to the latest open day held by the Glasgow Vintage Vehicle Trust.

Hubby is a proud, card carrying member of the GVVT and he really does look forward to his visits to Bridgeton (pronounced Brig-ton by Glaswegians like Hubby & myself x) bus garage, even though it's quite a trip for him to get there.  The GVVT help those attending by laying on free buses from the City Centre who pick up attendees and scoot them over to the East end of the city to the garage. Open day attendees reach the garage and might possibly (depending on what's available) get to travel there on a vintage bus too.😊 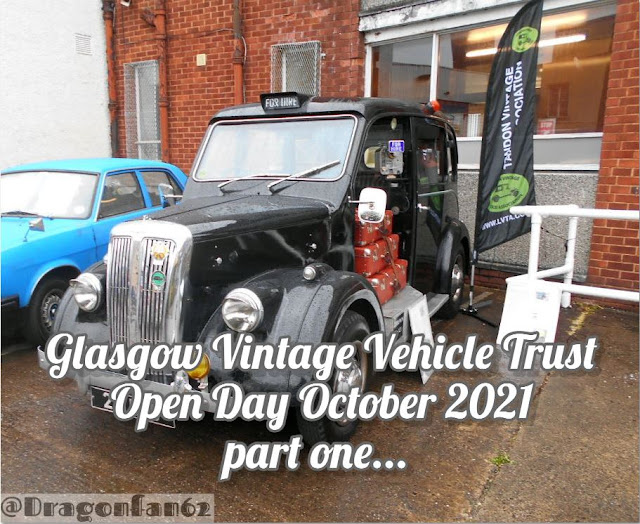 Well, on looking at the photos honeys, they seemed to naturally fall into three groups.  The first group are vintage cars - including the gorgeous taxi included in this post.  Does it count as a car? No idea but I love it so it's staying lol.😍  The remaining groups are buses and the not-cars-or-buses group.

The not-cars-or-buses group is made up of... would they be called utility or service vehicles?  I'm talking about recovery trucks, the ones used to tow and service fun fairs etc. In addition, but there are also some beautiful fire engines too.

The biggest group represented in Hubby's photos are, of course, buses.  Hubby is a huge fan of buses, an actual bus enthusiast extraordinaire.💖

This post will include images of three vintage vehicles. There is a Plymouth Belvedere (1957) a Buick Skylark Custom (1968) and a Beardmore Mark VII taxi (1959)

Why only three different vehicles Rosie?  Well, because there were only three vehicles included among Hubby's photos dear ones.  This isn't Hubby's fault either, I asked and he said there were in fact only those three there this time around.

Enough waffling from me then honeys, why don't you go grab a cuppa and maybe a cookie (or two) and meet me after the page break for the photos.  See you in a few minutes honeys...

Welcome back honeys, do you have your cuppa?  Me too.☕🍪 Sit back then, put your feet up and enjoy the photos.  I'll add links at the end if you'd like to find out more about the GVVT, hugs x

I have to admit that I know less than nothing about cars.  Seriously, not a thing.  I know they have wheels and sometimes go "vrooom.."  That's about the sum of my knowledge... oh no! Hang on, I know that you used to be able to use a stocking to replace a fan belt!  Well, that might only work if you're listening to Doris Day singing Move Over Darling on the radio, while driving a convertible... it was a favourite ad years ago.  If I can find it on youtube (isn't everything there?) I'll link it at the end.😊

Back to our first beautiful vintage vehicle then (although I now have that song playing in my head.😊) I have to admit that my first thought when I saw this beauty was... 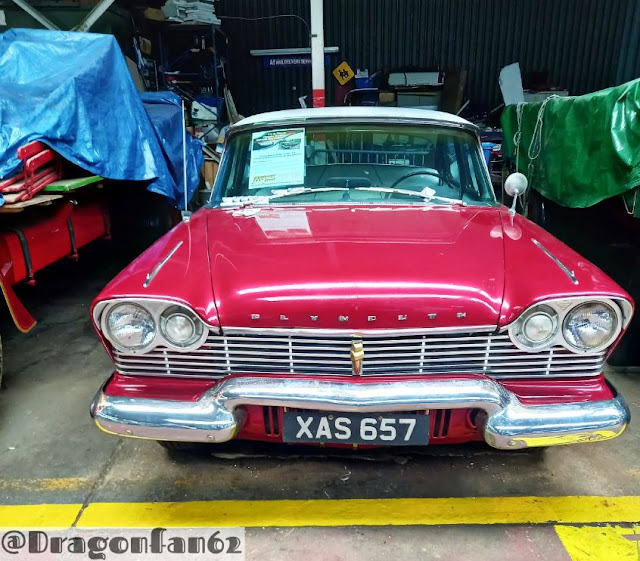 Christine.  Are you a Stephen King Fan?  Back in our dating days, Hubby came to pick me up one Friday night.  We'd arranged to go to the cinema and I hadn't been fussed as to what to see, so Hubby had picked.

"What are we going to see?" I asked him.

"A film called Christine" he said.

"Cool." I said.  Imagining a Herbie type affair, full of Disney smiles and heart warming moments.  Wow.  It wasn't Herbie.  It also became the first Stephen King book I ever read and made me a fan.💝

This beautiful Plymouth isn't a Plymouth Fury, as Christine was.  Are you impressed? I am.😊  How did I remember that?  See? Not Herbie = trauma.  Still made me a fan though..

This stunning car is a Plymouth Belvedere.  The Belvedere models were apparently produced from 1954 through to 1970.  The vehicle on display at the open day was a 1957 model... 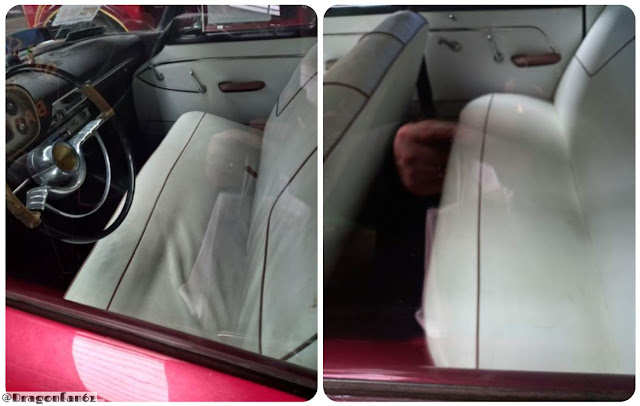 I mean, how could you not love this honeys? 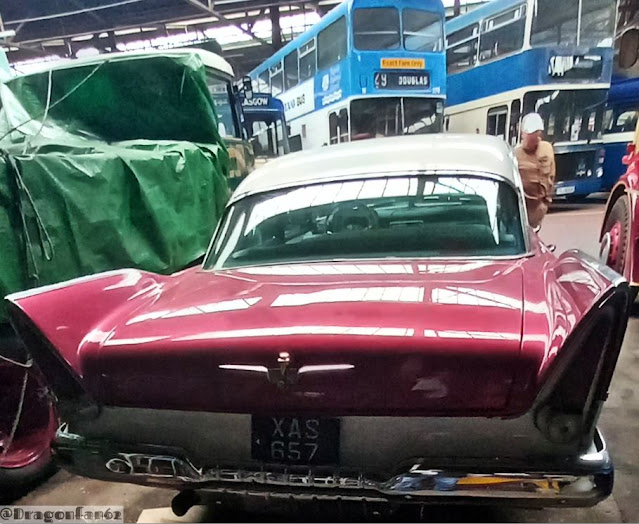 Just the lines and the all that chrome is enough to make this wee Scottish lassie's heart miss a beat or two....It's gorgeous!💖 It also matches up perfectly with that ad I mentioned earlier.  No it's not a Jaguar (the car in the ad I think, not sure but I do remember the ad was for Pretty Polly the company who made tights and stockings and yes, that song is still playing in my head.  It is a fabulous song.😊)
This vehicle, before I forget, can also be seen in the upcoming Indiana Jones movie.🎥 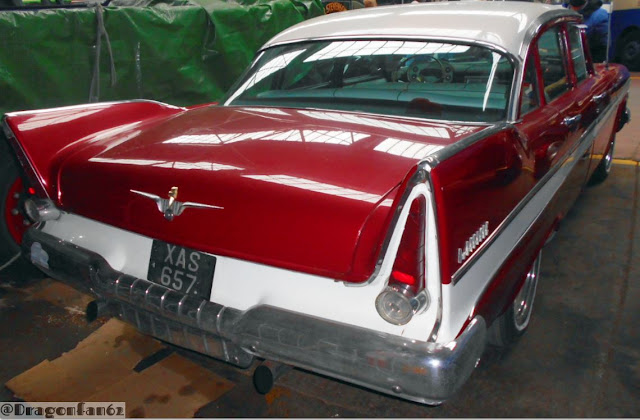 Also to be seen in the new Indiana Jones movie (due for release around 2023) and another beautiful car... 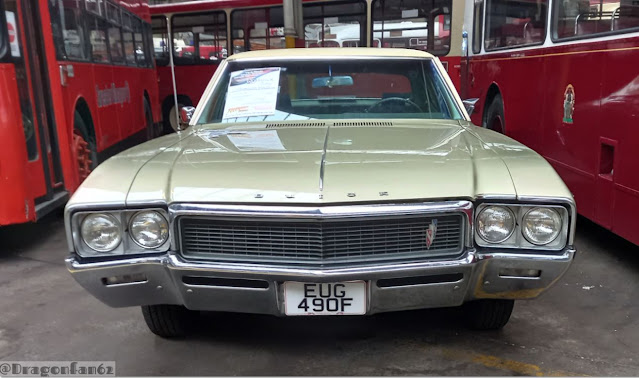 Again, I honestly don't know anything about cars.  Hubby is a walking encyclopedia about all kinds of vehicles but me? Nope.  So I was quite impressed that I recognised (by name anyway😊) this car.

One of our favourite movies is My Cousin Vinny.  If you haven't seen it, I absolutely recommend it.  A Buick Skylark was central to the plot of that movie, where two young lads are arrested for murder and have to rely one of their cousins, the aforementioned Vinny (played brilliantly by Joe Pesci) for their defence.  I'll see if I can find a link to the trailer for you.😊 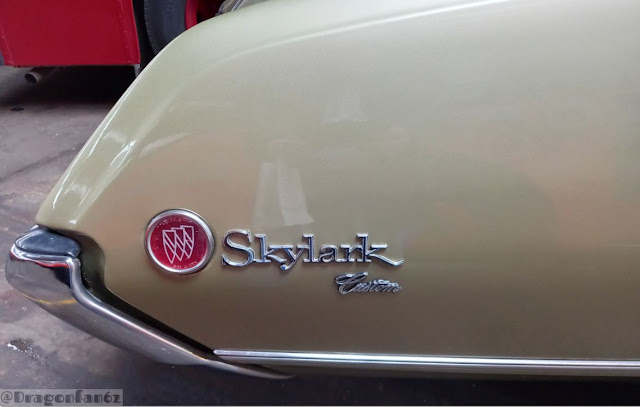 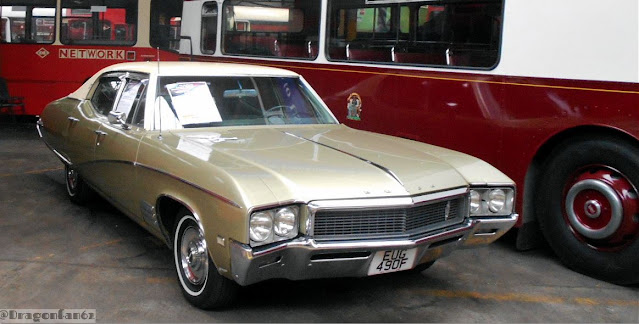 Again. All those gorgeous lines and all of that chrome!💖 No "fins" but oh my!💕💕💕 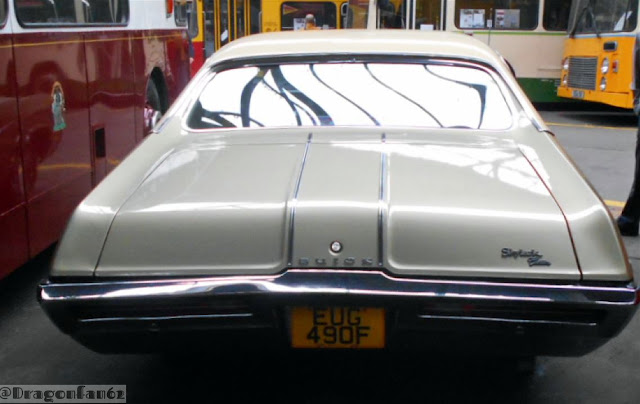 How are you feeling about the new Indiana Jones film honeys?  Are you looking forward to it?  I'm a bit uneasy.  I adore the Indy films, love them.  Adore Harrison Ford too.  Hubby and I never missed one of his films when they hit the cinema for years. A lot of years. Still love him.

I have to admit though that, even though it's part of our DVD library (yes we have one, it's huge, we're old school😊) I haven't ever seen the last one to the end.  I just couldn't get past the first half hour or so.  Hubby's seen all of it though and when I asked him just now he said "it was OK but it felt like an idea that's been done to death already"  So, will we buy it on DVD, of course, I might even get to watch the next one to the end? So many apologies to everyone who worked on the last Indy film, honestly I'm a fan of the franchise, maybe just too long had passed for a sequel? 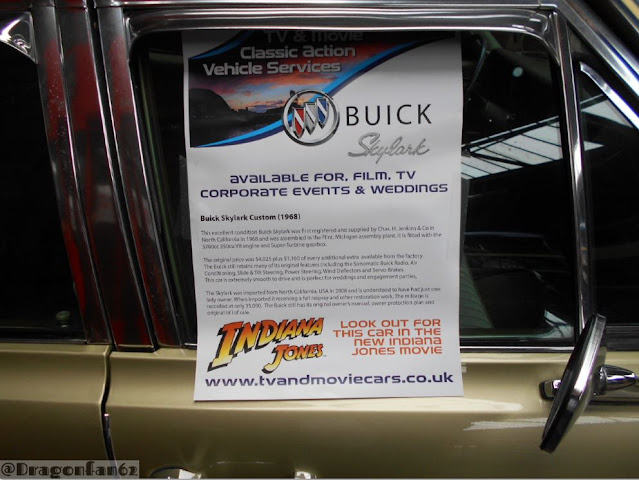 My Favourite! 💖💖💖💖💖💖 this!! I'm all about vintage honeys (have you seen my vintage board on Pinterest?😊) This isn't a taxi, it's a work of art.  From it's super shiny chrome to the vintage luggage already aboard.💖 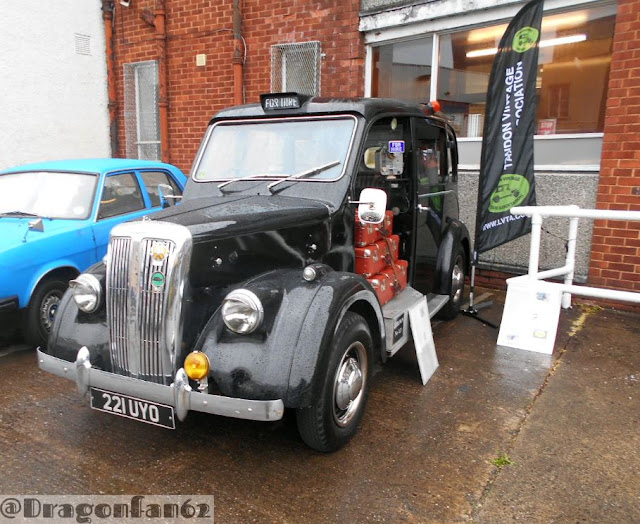 The Beardmore Company's history began on the Scottish shipyards but their famous taxis are what they're remembered for best and they began production in 1919.  I find it impossible to look at this gorgeous vehicle and not be bowled over by the glamour, by the vintage suitcases already packed inside and by the deepest longing to live in a time it represents. A time when ladies wore hats and gloves just to do the weekly shop, when gentlemen would lift their hats to ladies and hold doors open. When good manners were expected and ... the clothes!💕💕💕

Am I glamorising the past?  Of course, a little. Were there bad things that happened? Of course there was, but there was a whole lot of good too.  I grew up with stories from my Grandparents about pre and post war life in the tenements. It was harsh, much more so than today, but neighbours looked after each other.

Imagine how amazing the world could be if we concentrated on building communities? What if we held street parties and got to know all of our neighbours?  I remember the excitement of the Glasgow 800 celebrations and the silver (and golden) jubilees.  Next year will be Her Majesty's platinum jubilee and I can't wait to pin up bunting around our kitchen and make apple crumbles for our neighbours💖

I look at this gorgeous taxi and I hear Sid James and Hattie Jacques and the wonderful giggles of Barbara Windsor and it makes me think of old movies where a very glamorous lady would be helped into a taxi, already loaded with her equally glamorous luggage and it would speed her off into the night to catch the "boat train." 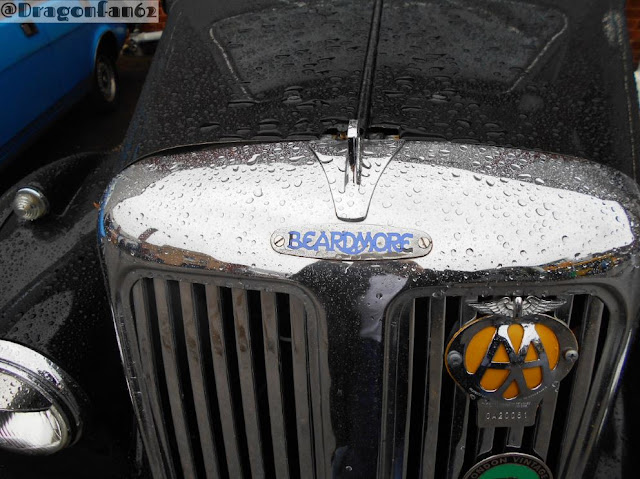 Well, that's it for this post honeys.  I hope I haven't rambled too much, and that you've enjoyed seeing Hubby's photos.  Thank you again to him for sharing them with us.💗  I'll include a link to the GVVT below if you'd like to find out more about them or even attend one of their open days.

Till later today dear ones (I've just noticed that it's after 1am💝) stay warm and safe everybody, hugs always x

The Glasgow Vintage Vehicle Trust can be found here.
An overview of the Plymouth Belvedere at Wikipedia can be found here.
An article about "Miss Belvedere" A Plymouth Belvedere car that was buried as a time capsule for fifty years.  When they unearthed it in 2007 well.... You can read the story here honeys (the photos made my heart ache. Seriously, ache.💔)
There's an update to the Miss Belvedere story, the car has found a permanent home in a car museum in Illinois.  You can read all about it here.
Great article here about Christine the movie.  Apparently they used over 20 cars in the making of the movie and among them were Belvederes, Savoys and Furys.  You can read more here.
A really interesting article on a Buick Skylark Custom (1968) Convertible can be found here.  There are lots of photos and it's an interesting read.
My vintage board on Pinterest. It's has over 5,000 pins and it's currently being worked on to try to separate them into folders.  I'll forever and a day swear that I was born too late... actually I have a board named that but it's about the Beatles.  Best. Band. Ever. You can see my vintage board here (and my Beatles board here.  😍)
The Pretty Polly ad with a lady using her stocking to replace the fan belt in her Jaguar car is on youtube and you can see it here honeys. It dates from the mid 80s I think but it still charms the socks off me.  There she is, miles from nowhere and she doesn't have to wait for a man to fix her car, she does it herself with a stocking.  I also love the outfit she's wearing. I dream of looking that good. Maybe in my next life.
While I was at YouTube I also managed to find the trailer for My Cousin Vinny for you too, as promised. It's here honeys.
You can find a listing here at Bonhams Auction House for a Beardmore Mark VII taxi (1959) with an interesting history of the company. 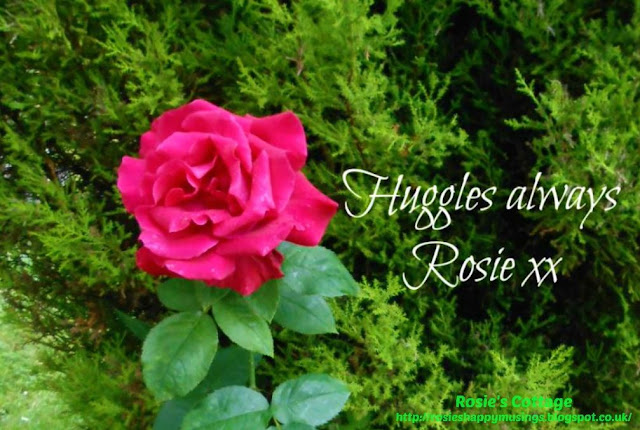