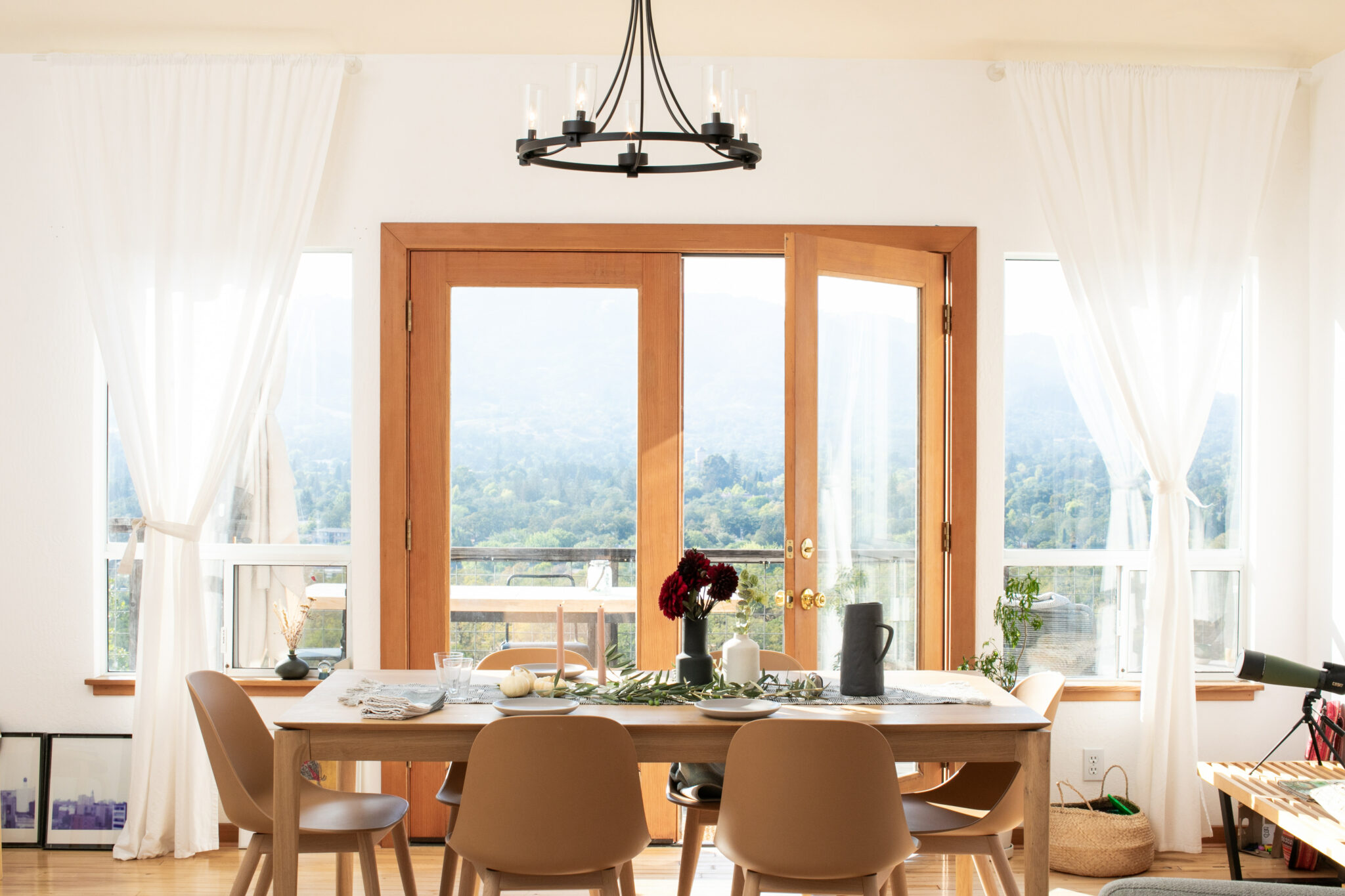 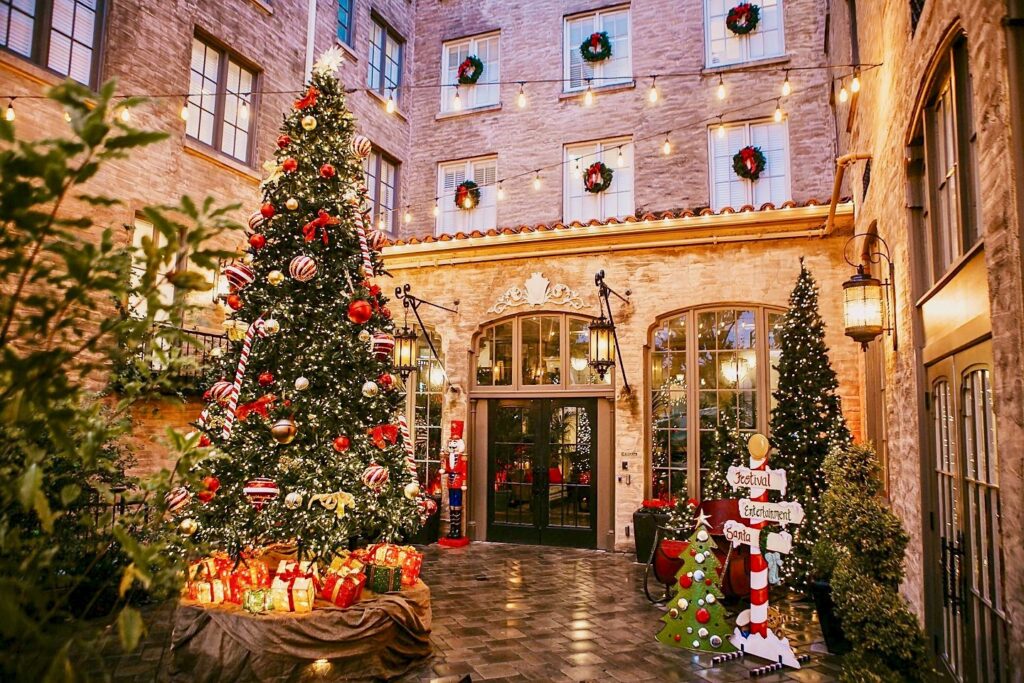 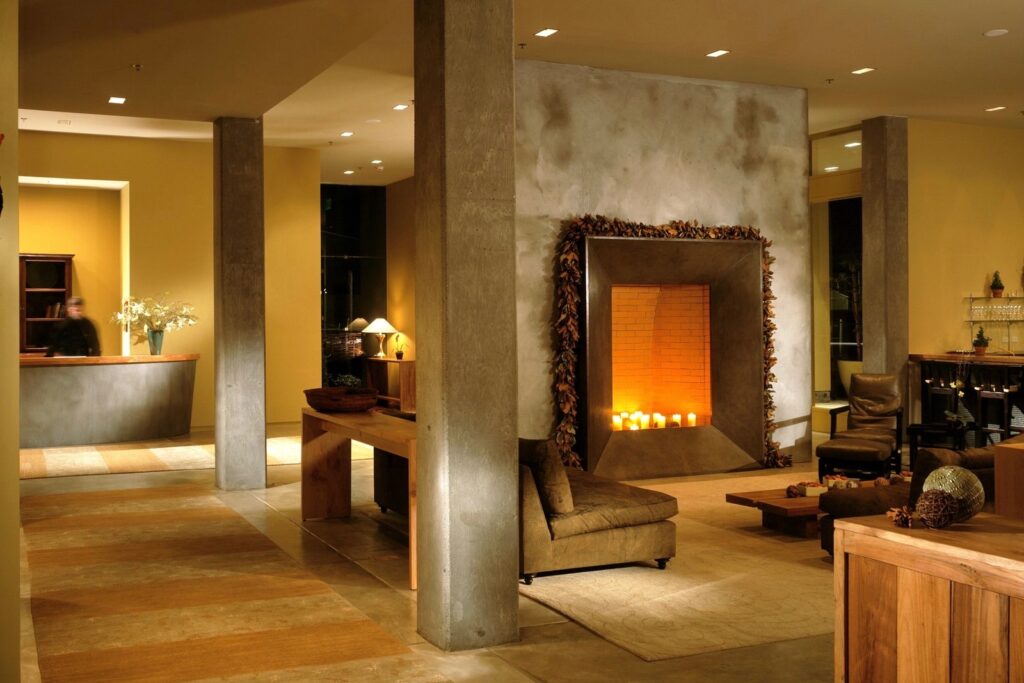 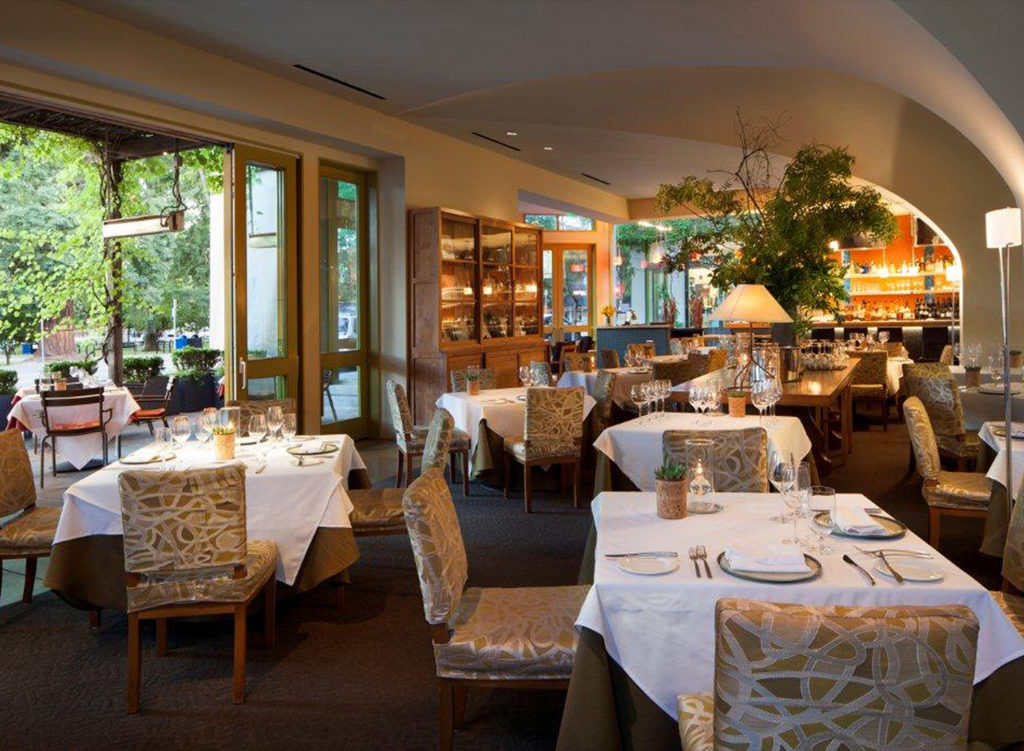 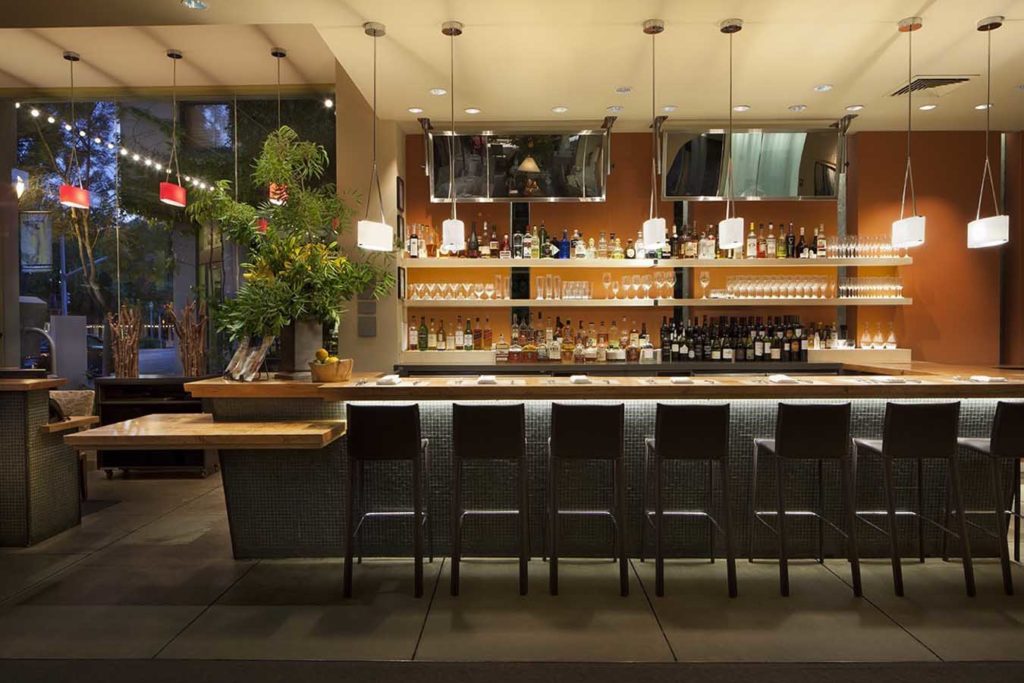 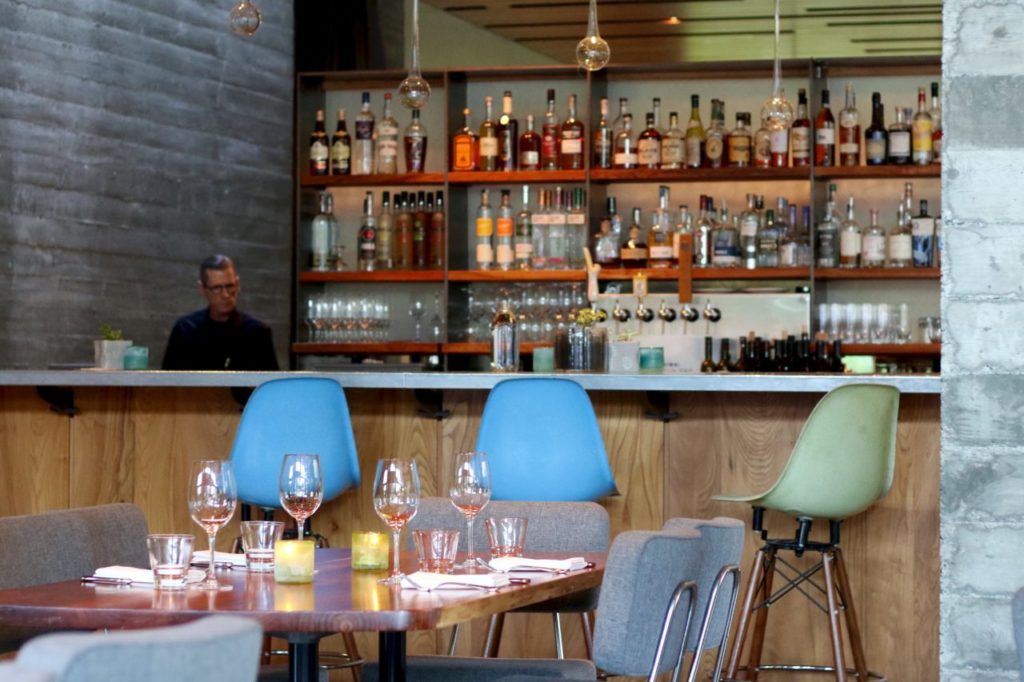 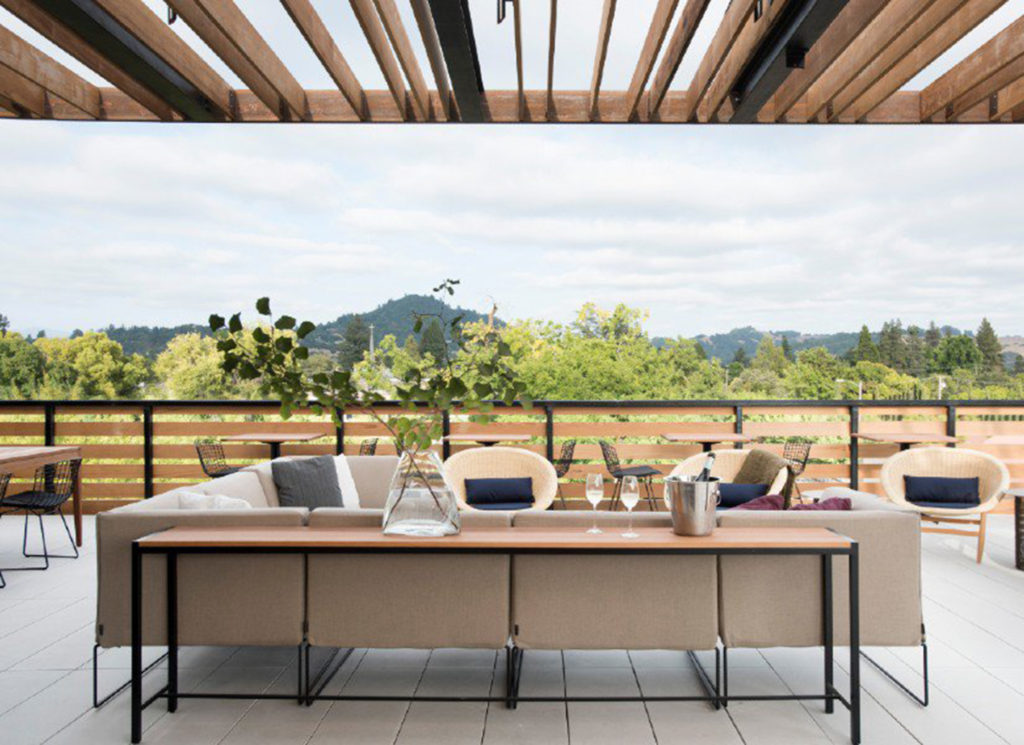 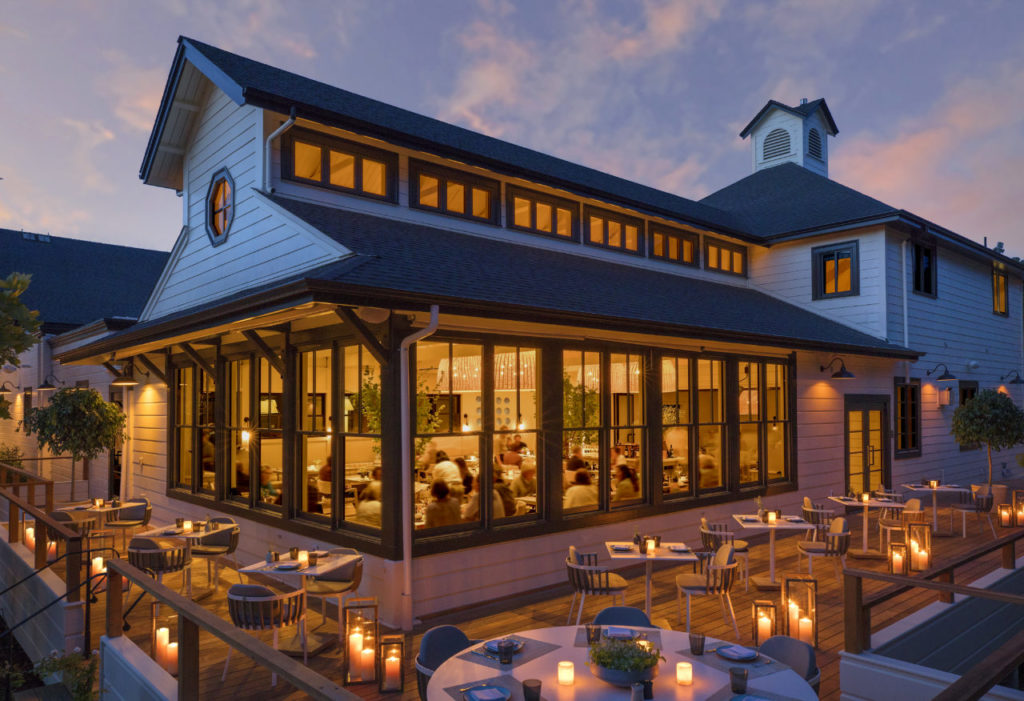 “It’s magical to wake up here,” says Gretchen Krebs, relaxing on a tranquil morning with her husband Ian Read on their outdoor deck overlooking acres of dense oak woodlands. It’s the view a hawk might see, descending the steep hillside to scan the valley floor. In the distance, an antiquated water tower rises above Fairmont Sonoma Mission Inn & Spa. Beyond it, the sun sets every evening behind Sonoma Mountain. (That’s when the coyotes start to howl.) But for now, the only sound is the low chatter of songbirds. “Being upstairs, our bedroom window looks out onto the landscape. The house is very thoughtful in that way, facing out toward the land.”

Last August, Krebs and Read, founders of the Oakland architecture and design firm Medium Plenty, took a huge leap of faith, moving with their 8-year-old daughter, Mica, to Sonoma after living for 16 years in downtown Oakland, where they had renovated a picturesque Victorian.

“If you can picture the house in the Pixar film ‘Up,” that was us,” jokes Krebs. As condos and office buildings went up all around them, they tried to coexist with the constant beeping of trucks, waking up each morning to workers peering down from scaffolding. But when the pandemic hit, they felt it was time to go.

“We told ourselves, if we’re going to uproot our lives and put ourselves through all this, we’d better land in a cool spot,” says Read.

They soon stumbled on the white tri-level rental home perched on a shoulder high in the Mayacamas, just outside the town of Sonoma. Their shady neighborhood winds up through the foothills overlooking Montini Open Space Preserve, meandering woods to the west and vineyards to the north. Likely built in the ‘80s, with Scandinavian farmhouse ideals in mind, the rental might be a little dated, to the point that the wide-tiled kitchen counters are actually coming back in style. But the home is their foothold in a new community, where more than a year later, the daily grind of city life (and repeated car break-ins) has totally washed away.

For Krebs, who grew up in Bonny Doon outside Santa Cruz, and Read, who was born in the Pennsylvania town of Stroudsburg in the Poconos – it’s a return to small-town life. “It’s kind of the antithesis of what we were in before,” says Krebs. “We were in a fishbowl in a city with not a lot of breathing room. And then to come here and to have this endless expanse of land, it felt really calming and it felt like the right place for us.”

Almost sprawling compared to the tall, narrow confines of their urban Victorian, the family’s new house expands in all directions, which means they spend a lot of time playing and dancing in the great room, which is filled with natural light. This is also where they set up camp for movie nights, which they project on the wall across from the fireplace.

It didn’t take long for Mica to find what she calls her “secret room,” a hidden space tucked beneath the lower staircase on the bottom floor (picture where Harry Potter lives with the Dursleys). And a few weeks after they moved in, Read also discovered an unfinished basement space off the lower deck. He’s converted it into his shop, where he works with Mica on new DIY projects – a toy boat that floats, a stage for her stuffed animals and a refurbished outdoor table. The backyard has enough terraced space for a trampoline, a small garden, and plenty of room to roam for Nori, their ever-curious 4-year-old beagle mix.

Only a couple of weeks after moving in, the family was invited to a sing-along as neighbors joined together to belt out classics like “Stand by Me” on the hilltop just up the road. It’s a community tradition going back years, held on the last Thursday of each month. As the holidays approach, the trees lose their leaves, and heat lamps warm the back deck, one of the neighbors will resurrect an annual high-wattage Christmas wonderland – a beacon for miles around, decked out with animatronics synched to a seasonal soundtrack.

Last year, on Christmas morning, Mica awoke to a scavenger hunt as the family wondered around the property to find a new swing hanging from an oak tree, a custom fairy house Read built from foraged branches, rocks, and acorns, and a new telescope to explore a night sky far brighter than anything they gazed upon in downtown Oakland.

In many ways, their journey, part of a larger migration of urban dwellers escaping to rural hamlets during the pandemic, recalls the allure of the back-to-the-land movement of the ‘60s. They might not be hippies – although Krebs and Read were both raised by hippie parents. But like many families who ditched gridlocked cities, they’re drawn by a similar appreciation of nature and land, while reprioritizing family over work, exercise over multi-tasking, and quality time over commuting.

Before, Mica would often stay in Oakland after-school care until 6 p.m. Now, mostly working from home, Krebs and Read try to wrap up their work-days by 3 p.m. so they can pick her up from school and go on an afternoon adventure, whether it’s a trip to get ice cream or embarking upon a new art project. Krebs walks at least an hour a day, exploring new neighborhoods, and Read rides his bicycle in the surrounding hills. Dinners are out on the deck whenever possible, where Read likes to fire up the grill, only steps from the kitchen, for spatchcock chicken with grilled onions, peppers and zucchini – all served on one platter for everyone to share.

Some days, it feels like their biggest worries are how to win the ongoing war with ground squirrels invading the garden, what to do with five gallons of olives they harvested from trees below their deck or what to mix for “mandatory cocktail hour” that kicks off the back-deck sunset party nearly every day.

The more balanced daily routine fits perfectly with the Medium Plenty ethos, focusing on a holistic design process where the interiors and architecture blend and resonate together. Over the years, they’ve redesigned an industrial warehouse to create a modular, moveable, multi-functional space for a philanthropic incubator. They’ve done residential add-ons and renovations as far flung as Pasadena, Boulder, and Seattle. After recently restoring the Thatcher Hotel in Hopland, the couple took on a reimagining of the tasting room at Merriam Vineyards in Healdsburg.

Happy in their rental, but looking for a place of their own, Krebs and Read hope to stay in Sonoma if possible. They still make the occasional trek to the office in Oakland, but every time they drive home, there’s a feeling that returns—a simple reminder that they made the right decision to flee the city for the country, Krebs says. “As soon as you turn onto Highway 12, you can feel the decompressing.”

Imagination is everywhere in the Sonoma home of designers Ian Read and Gretchen Krebs. Sculptures and vibrant paintings hang from walls all over the house, many made by artists with developmental disabilities enrolled at the Creative Growth arts center across the street from the family’s former home in Oakland. On the lower deck, there’s a fairy house that Ian made from foraged branches Read found around the property. And upstairs, the family carved out a narrow space between the stairs and a bedroom to create Mica’s art studio. Sometimes they disappear into Read’s repurposed shop to see if they can build a tiny boat or remodel a fairy house. Above the shop counter, pinned to 2x4s, are ongoing project plans that Mica has drawn for reference. At 8, “she can use the drill and the jig saw,” says Ian. “I don’t have her on the chop saw yet, but she’s getting the hang of it.” For the holidays and beyond, here are a few tips Gretchen Krebs offers to foster creativity.

A regular, intentional space to work on your art is so important. It can be just a table in the corner of a room, but make it a space that you can call your own.

Keep supplies in the open

The risk with putting things away is that they don’t get used as often. For Mica, we have bins of Legos and yarn and fabric she sews with. She likes to use her old clothes that get holes in them to make outfits for her stuffies. And we keep a cart on wheels loaded with pens, pencils, markers, all kinds of stuff.

I think it’s important not to keep the house too tidy. When we ask Mica to pick up her things, she keeps a few projects out that she has in the works, just to let her have them out in the open. That’s the fun, right? The mess! We call it contained chaos.

The post A Dream Home in the Hills Outside Sonoma appeared first on Sonoma Magazine.